Joey Turks (Zane) is a none-too-bright Hollywood sneak thief with nicer hair than mine, sort of a 90210-guy gone awry. Stabbed in the process of burglarizing a crony's homestead, Joey flees into a nearby cemetery where he (literally) stumbles upon Mona (Beals), a semi-psycho punk rock cabaret singer currently in the process of committing suicide. Struck by this odd twist of fate, the two outsiders fix each other up and promptly fall for one another faster than you can say “Hollyweird.” When Joey's crony is found murdered the next day, things really start to happen to the new couple. The aged and over-zealous detective Hank Dick (McGavin) fingers the young hood as a possible murder suspect, an elephantine drug lord and his disco-driven blond toady are suddenly convinced that Joey knows the whereabouts of their missing caché of designer love drugs and, to top off an already less-than-promising day, Mona's worthless ex-boyfriend (Le Gros -- nearly reprising his role of Bob from Drugstore Cowboy) pops up hoping for reconciliation. And that's all in the first 24 hours, mind you. Blood & Concrete's storyline may at first glance seem more convoluted than a fire drill at a Slinky factory, but it's actually not so bad. First-time director Reiner and co-writer Richard LaBrie probably concocted this one during some crazed 4am story-session, hunched in the back of Hollywood's “Rock'n'Roll” Denny's and hopelessly tweaked on way too many cups of Maxwell House. Not that it matters, though, because despite the film's occasionally glaring plot holes and semi-annoying continuity glitches, Blood & Concrete manages to work just fine as an energetic and often hilarious look at the seamier side of life in Lost Angeles. Officially subtitled “A Love Story,” Reiner's debut comes across more as a nineties-style Cuisinart pureé of comedy, action, crime drama, and freak show. Hard to pigeonhole and a classic by no one's standards, Blood & Concrete nevertheless manages to be -- like Joey Turk's hair -- pretty darn cool on its own terms. 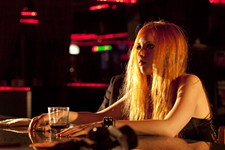 A Winter Rose
A star is born (again) 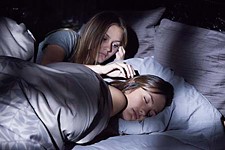 The Roommate
A college student grows fearful of her new dorm mate in this thriller which costars Minka Kelly and Leighton Meester.