There's not much here to distinguish Strictly Business from The Secret of My Success, that fairly recent Michael J. Fox film about moving up through the ranks in corporate America. Davidson of In Living Color plays a street kid doing his time in the mail room while Phillips is a hero in the real estate office upstairs. Though Phillips promises to give Davidson a chance, it never seems to be the right time until he spots Berry and finds out that Davidson knows her. Then the only obstacle to true love and career advancement seems to be Phillips' complete lack of style. There aren't as many laughs here as you might think in watching a black man attempt to be more black and, usually, fail. However, the point that one should not forget his or her roots in the move up is a fair one. Considerably less fair is the cruel portrayal of Phillips' buppie girlfriend -- the one he plans to drop as soon as he scores with Berry. There is resentment and anger towards the ambitious black woman that's not matched in the film's attitude towards Phillips. He's redeemable, but these women, dark caricatures of the women in Spike Lee's Jungle Fever who are frustrated by the lack of available men, are seen as emasculating bitches. In contrast stands (or rather shakes, shimmies and bends real low) Berry, whose ambition it is to own her own nightclub. Notable here is the fact that Nelson George of the Village Voice, an early chronicler of rap music, wrote the script with Pam Gibson. The dialogue is good even when the characters have nothing much to say and the plea that African-Americans help each other rather than compete with each other is the film's saving grace. It is what separates it from the rest of the trash offered as entertainment to kids on dates. It's just too bad the difference between them isn't a little greater. 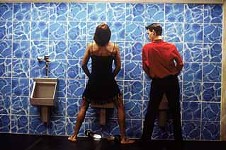 Juwanna Mann
Point to ponder next time you spot a couple of homeless dudes behind a Minit Mart dumpster express-laning it to oblivion with a jug of ...

Bamboozled
Spike Lee makes movies as though they had the power to communicate things and change lives. As a filmmaker, he is at his best as ...