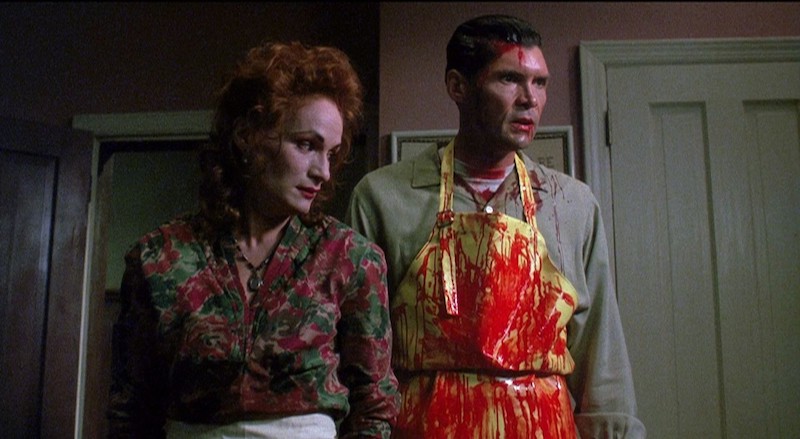 The People Under the Stairs

A young boy (Adams) from the black urban ghetto faces a dilemma. It's his thirteenth birthday, his family is being evicted from their tenement home by their voracious landlords and his mother is being eaten alive by a cancer that the family can't afford to treat. His name is Fool (after the Tarot cards his prostitute sister reads); he's a bookish boy who dreams of becoming a doctor. But when his sister's boyfriend dangles an opportunity to score a lot of money by burglarizing the home of Fool's rich white landlords (who own vast portions of the ghetto), Fool seizes the day.

Once inside the house, Fool gets sucked into the bowels of a hell that can scarcely be imagined. Here reside the deranged landlords, Man and Woman, who are both husband and wife and brother and sister. (McGill and Robie will be familiar to viewers as another sick TV couple, Big Ed and Nadine from Twin Peaks). Their house is a veritable fortress, with impregnable exits, recessed passageways, collapsible staircases and hidden rabbit holes. Down one of the holes, Fool finds Alice, the daughter of the household, who has never been outside its confines. She's a sad, abused child who knows no reality beyond these walls. Then there's the reality that's going on behind the walls and under the stairs.

Grand Guignol sickness seeps out of every crevice of this structure. This is the work of the Wes Craven we came to admire in The Last House on the Left, The Hills Have Eyes and the original A Nightmare on Elm Street, a director who, at his best, uses the horror genre to tap deep into the fissures of the American family unit. Behind the benign countenances, he finds the evil that lurks therein.

The People Under the Stairs was inspired by a true story of a break-in and it's this movie's social underpinnings that give it its power. Propping up this story are a myriad of issues and themes that range from social injustice, racial prejudice, child abuse and community solidarity. It's a distinctly urban horror tale that looks at the sinister pathologies that go on behind closed doors. It's also wryly funny. When Woman exclaims “You children will be the death of me” or Man bellows at the noisemakers below “Don't make me have to come down there,” it's like some typical family portrait as seen through a refracting surface of parody. By the film's end, Craven begins to pull out all the stops and allows the action to leap wildly in unfocused directions that deflate some of the suspense with false endings and rely too heavily on insufficient explanations. So, while The People Under the Stairs may leave some horror fans unsatisfied and other horror detractors repulsed, it ought to satisfy those viewers who appreciate a thoughtful and visceral movie entertainment.