Let's define our terms here. If you're going to a horror film, because you want to scream and giggle and feel better when it's all over, well, hell, Dolly Dearest is art. Lease shows a fine contempt for the niceties of plausibility, sensitivity and intelligence, but she's got a real knack for timing. She doesn't waste a lot of time setting up the premise: the typical dopey TV family -- a little girl, an over-educated little boy, absent dad, stressed out mom -- comes to live in Mexico to start a doll factory next to an excavated crypt. Demons come to play and inhabit the doll belonging to the little girl (Hutson). Basically, we just wait to see who's next to be doll meat, but we don't have to wait long and that damn doll is really creepy. She scampers across the floor in her little black patent leather shoes, she pops up on top of a shelf or she appears from behind, but she's always coming from the unexpected direction. Hutson, as the doll's best friend, is reasonably creepy herself. She's the dark side of the perfect little girl. Unfortunately, there is a down side. It's criminal to waste Torn as an archaeologist brought in to give what laughingly must be called the explanation designed most likely to avoid charges of racism. Torn's archaeologist is at pains to explain that these demons aren't Mayan, no, no no, they're some kind of really bad tribe of Indians who worshipped the devil. Bottoms doesn't really do much to earn his pay either. Crosby, better known by many as Lieutenant Yar on Star Trek, makes a pleasant if slightly somnolent mom. Also, in a transparent effort to make way for 19 or 20 sequels, this film has an absolutely terrible ending for a horror film. Seeing the movie with an audience full of enthusiastic college students, I was almost deafened by the resounding “huh?” as the credits rolled. 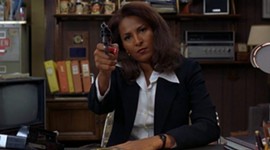