The best thing to be said about The Borrower, is that McNaughton clearly has had his sophomore slump, and that Sex, Drugs, Rock & Roll, the Eric Bogosian vehicle, must be better and Mad Dog and Glory, which McNaughton is currently working on with the help of Martin Scorsese as producer and Robert De Niro and Bill Murray as stars, will get McNaughton's career as auteur back on track. It's not that The Borrower is so bad, though it ain't great, it's that after Henry, Portrait of a Serial Killer we justifiably expected better. Both movies have a clear lock on the adjective “disturbing,”and The Borrower, with its wry sense of humor comes close to having what it takes to become a cult hit. The Borrower of the title is an alien, a killer banished to earth by its own species, insect-like creatures who “devolved” him into a human being. He's told to take care of his body, any damage to it could result in unpredictable metamorphosis. Does he listen? Of course not, and the revolting metamorphosis that takes place includes an exploding head, among other digusting things. Apparently, if the thing rips the head off the first unsuspecting earthling who comes along, the other squishing, ballooning, erupting distortions of his body are kept in check. While the creature sticks to the interstices of society all is well. He can rip heads off winos to his heart's delight, but let him move to the suburbs, and it's not long before the cops draw a lead on him. And herein lies the problems -- the subplot featuring Gordon and Chong as detectives is thin stuff and it gets thinner with the addition of a subplot involving a psychopathic killer with a murderous crush on Chong. Some point about the inhumanity of killers was probably intended, but it is long lost in the aliens' wanderings and Chong's unbearable line deliveries. McNaughton's view of society is bleak. It is a world where people are killed for no reason and everyone keeps a gun in the glove box. 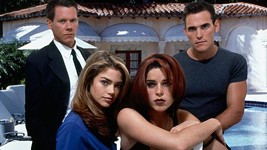