Ever want to know how to make 90 minutes seem like a lifetime? Go see Shout. What a mess. It's the mid-1950s in Clarity, Texas. The new music teacher Cabe (Travolta) arrives at the Benedict Home for Boys, a reform school for troubled and rambunctious young men. Its motto is “Hard work...works.” The sounds of rock `n' roll music infiltrate like beckoning sirens and hipster Cabe uses that as a hook to interest the boys in discipline, personal expression and group effort. Or something like that. No matter that the rock `n' roll played in this movie sounds a whole lot more like rhythm & blues (except for the thoroughly contemporary Robbie Robertson songs that the movie bursts into on occasion). And no matter that these boys who've never heard a lick of rock `n' roll start instantly playing like old Delta bluesmen. Jesse (Walters) is the school's chief troubled teen (you can tell by his James Dean-reincarnate looks). His love interest is Sara (Graham), the stern schoolmaster's college-age daughter (you can tell by the way her lovely tresses are backlit). Cabe's secret from his past catches up with him. The boys learn that hard work...works. And Sara presumably goes back to college. Choreographer Hornaday (Flashdance, A Chorus Line) debuts as a director with Shout and could be forgiven some of the story defects if only Shout were a better musical. In fact, practically the only time the movie comes to life is during a club sequence where there's live music and dancing (though the club is pretty unbelievably interacially mixed for 1950s Texas). Then there's Fiorentino, who Travolta meets during his first few moments in town. He tells her that she's going to see a lot more of him but she only gets another few seconds of screen time after that. At another point the boys break out of the school through the heavily fenced yard only to walk right through the open gates when they return. Nothing about this movie works or has a shred of believability. It makes you want to shout. 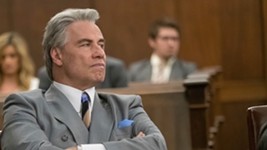 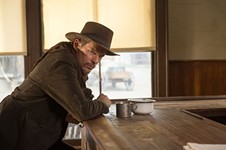