Danny Scoular (Neeson) is an ethical, prideful family man who lives in the Scottish mining village where he grew up. His union activities and his beliefs landed him a prison term, though his stand earns him the respect of the community. Subsequently unable to find work, Danny loses his self-respect as he and his family get by on his wife's earnings (which may not be plentiful but are, at least, sustainable -- the main problem being Danny's male ego rather than any threats of starvation or indebtedness). When his childhood friend Frankie (Connolly), a small-time crook fronting for a Glasgow gangster, offers Danny big money to fight a bare-knuckles boxing match, the out-of-work man of principles sees it as a way to regain his dignity. His wife Beth (Whalley-Kilmer) is appalled and thus, takes the kids and moves out. Come fight day, the bout is excruciating. The two men beat each other to bloody pulps in a long, painful sequence. Danny wins but in the aftermath feels remorse. So he steals the gangster's money and goes to the hospital and tries to give it to his competitor whom Danny has permanently injured with his blows. Here he learns the truth of their bout -- that drug wars were behind it and it was merely an elaborate coin flip between two gangsters deciding who would snuff out a rival drug dealer. Pretty damn indignant now, Danny returns home to find Beth and the kids also back home. The gangster and his minions come chasing after Danny with malice on their minds but Danny has now, most literally, positioned himself within the bosom of his community who form a phalanx of involved citizenry surrounding Danny. It's the movie's closing image. But involvement is precisely Crossing the Line's problem. It tells and tells its story but never delivers a punch that actually connects. The acting is excellent but there are hardly any moments of emotional resonance. It all plays like a bunch of righteous indignation, drug scum treachery and moral compass reading. The story is based on Willim McIlvanney's 1985 novel The Big Man and directed by British up-and-comer Leland (co-scripter of Mona Lisa and director of Wish You Were Here). Crossing the Line is no Rocky or Raging Bull. It has neither their heart nor their style. But it has more than a little in common with Triumph of the Spirit, a boxing movie of a couple years back starring Willem Dafoe about a Greek Jew at Auschwitz who boxes in order to stay out of the ovens. To box or not to box -- that is the question. 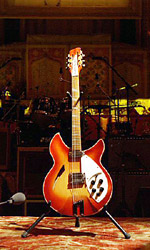 The Concert for George
...