You've seen this one before and you'll see this one again -- an innocuous sports comedy about a team of losers who have to pull together to become a successful squad. And of course in the process learn something about being true winners. When the NCAA sacks the entire squad of fighting Armadillos of Texas State University for recruiting violations, the school is forced to rebuild its program from the ground up. First, they snag the “above reproach” commissioner (Elizondo) to serve as the new coach. He and his assistant (Loggia) must invent a team out of a bunch of non-athletes. Their quarterback is a 34-year-old freshman (Bakula). Around this setup, numerous secondary plot developments are woven. Miller is the prissy dean who wants football thoroughly eradicated from academia, Kozak is Bakula's journalism professor/love interest, Sinbad is the astronomy instructor/team recruit, Bateman is the rich kid/halfback, Schneider is the stadium announcer (played as his Saturday Night Live character of the obnoxious office worker who recites endless variations of his colleagues' names), swimsuit model Kathy Ireland is the female soccer player recruited as the team's placekicker. None of this evolves into anything more than sideline snippets -- mildly amusing while they're occurring and instantly forgettable once they're over. The movie also features cameos by boxing champ Evander Holyfield and football pros Dick Butkus, Ben Davidson, Earl Campbell, Roger Craid, Tony Dorsett, Ed "Too Tall" Jones, Randy White, Jim Kelly, Jerry Rice and Herschel Walker. Necessary Roughness was filmed in Denton at the University of North Texas. I wish that movies, like scholastic football, could be judged on a "no pass, no play" basis. 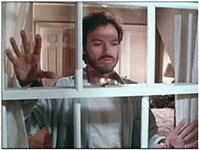