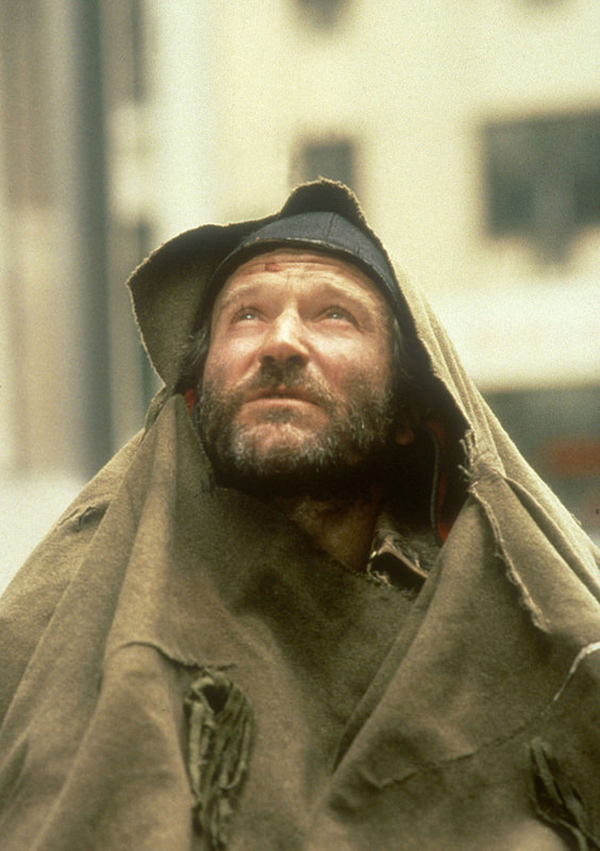 Seems like the rule in Hollywood is that if you're searching for the Holy Grail, director Terry Gilliam is the man to call. The Fisher King is a fanciful spiral of mythology, madness, cynicism and salvation in which a Red Knight on a fiery white steed pursues a homeless lunatic through the streets of modern Manhattan, a once-imperious king of the New York air waves serves a drunken penance for his flippant arrogance, and turreted castles loom over the rush-hour pedestrians while the Grand Central Station concourse becomes an enchanted ballroom for commuters. The Fisher King combines lofty aims with loopy flights of indulgence. Midst its perpetual frenzy of antic activity, the movie is heading toward the Grand Statement. It seems to want to tell us something big about repentance and salvation, contrition and absolution...but it can't stop itself from breaking into Ethel Merman schtick or Robin Williams-inspired lunacy. This is, at once, both the charm and the downfall of The Fisher King. It takes on way too much (is it a comedy, is it a fantasy, is it a parable, is it a morality tale?) and it winds up with this garrulous, overstuffed font of activity. The fact that it succeeds to the extent that it does is because it lays on its whimsy with bravura strokes. And it also succeeds because of its cast. Each player is nothing less than a joy and wonder to behold. Williams, as expected, turns in another one of his triumphs of reckless babble as Parry, the medieval history professor turned mad from grief due to a tragedy unwittingly provoked by a shock DJ's unknowing on-air comments. As Jack, that radio celebrity, Bridges plays his self-centered glory days and subsequent dereliction with such passionate restraint that you come away thinking about what a great actor Bridges can be when he sets his mind to it. Plummer, as the klutzy object of Parry's affections, is a bumblingly shy eccentric. Ruehl here proves herself (as if she hadn't already in Married to the Mob) to be one of the great screen comedians working today. The Fisher King is the kind of movie that has “awards” written all over it. (My guess is that it will lose them all, except for maybe art decoration, because no one will be able to isolate the individual components they like once voting time roles around). The fantasy's charm is broken by the unsavory realism and the fable's moral lesson is ambushed by salvations that seem too pat and unconvincing. Still, The Fisher King takes you on a ride that's most enjoyable; just be warned that it's a journey with no ostensible compass.