More so than any other type of film, monster movies undoubtedly produce the greatest amount of sequels. From James Whale's Frankenstein to John Carpenter's Halloween, and from Merian Cooper's King Kong to Sean Cunningham's Friday the 13th, the sequel has always been part of the game. Ditto, of course, with the Nightmare on Elm Street series, of which this new offering promises to be the last. As much an American pop icon as Willard Scott or Stephen King, Freddy Krueger -- Hollywood's resident Sandman From Hell -- has devolved from the horrific, ill-defined phantasm posited in the original film, into a bland and annoyingly predictable boogeyman loved by kids everywhere. (Has everybody forgotten the character's lurid origins as a jovial child molester, a la John Wayne Gacy? Apparently so.) As for Freddy's Dead, there's not much to say that you probably haven't already guessed, except, maybe, that it's even worse than you thought it might be. Jumping wildly from dreams to reality and back again, director Talalay and crew never seem to figure out what they want to do. There's a well-intentioned stab at trying to sort out the various intricacies of Freddy's mortal life, but even these are scattershot and ultimately unenlightening. Plotted by the brain-dead, the story seems more like a crazed collection of cast-off ideas and scenes than a serious attempt at horror filmmaking. The last twenty-odd minutes of the film were shot in cheesy, anaglyphic 3-D, which only adds to its overall annoyance/headache level. Not a good idea, people. Freddy's Dead is hardly a fitting capstone to one of the genre's more original notions, but after six tries, what should we expect? Something better than this tripe, surely. “The Final Nightmare?” Please. 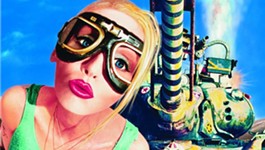 Tank Girl
A movie that combines Busby Berkeley chorus lines with killer mutant kangaroos and the wildest female action hero this side of La Femme Nikita. 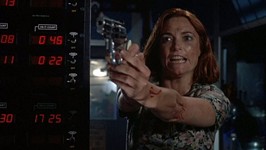