By virtue of its very size (5 hours and 11 minutes), there is the temptation to call this restored version of 1900 (originally released in 1977 in truncated form) an epic. It is not and the ways in which it is not is very interesting. For it is not the tragedy of one hero, it is instead, the story of an era told through two characters. Bertolucci's characters are not only not heroic, they are often frail creatures unable to withstand the pressures of public opinion or the allure of decadence. Set on a vast farm owned by the landlord Berlinghieri family and tilled by the peasant Dalco family, the story spans the period between the death of Verdi in 1900 and the death of Mussolini in 1945. It begins at the eclipse of feudalism and ends at the beginning of our modern era when fascism was defeated and the united people faced a new history. Now, almost 15 years after its making, it's almost impossible not to wonder what Bertolucci thinks about his beautiful Marxist treatise on the immortal combat waged between the workers and those who would own their work as it is fought in Italy. There are a lot of speeches made from atop tractors, haystacks and over dead bodies that are moving, but at the same time seem like charming artifacts of a more idealistic time. The first part of the film tells the story of two young boys, one a Berlinghieri, a future landowner, the other a Dalco, born to the soil. This first section of the film is owned by two old men, the Berlinghieri and Dalco patriarchs played by Lancaster and Hayden. It is defined by cameraman Storaro's cinematic views of the Po Valley where every shot of mist enshrouded trees, antique furniture in a darkly lit room, or field of grain is not only a cinematic painting but a glimpse into the interior of Bertolucci's psyche. He returns again and again to the Po Valley, most notably in Before the Revolution and Spider's Stratagem to explore the effects of politics on the individual. As the two boys grow up they are played by DeNiro and Depardieu. DeNiro as the Berlinghieri heir is an effete coward. He despises the fascists as represented by his brutal and murderous foreman, Sutherland, but he's afraid to fire him. In contrast, Depardieu fights and struggles every inch of the way. De Niro is amazing here. He is so young, so feckless, so light with none of the tendency to weight and ponderousness, perhaps even rigidity, that he exhibits in later roles. He plays against the enigmatic Sanda, as his wife made wretched by her husband's cowardice. Depardieu is simply gorgeous: a great tree with roots deep into the heart of the earth. There is not enough room to talk about all the great performances in this movie, though Sutherland, as evil incarnate must be mentioned. 1900 is a marvelous movie, Bertolucci is one of the best directors who has ever lived, but this long "director's cut" version of 1900 is not a complete success. There is a shorter version midway between the long European release and the short American release that is probably the best version and it clocks in at around four hours. After a virtuosic first half, 1900 becomes didactic and worse, choppy. I have difficulty deciding what I'd throw out -- there are so many images here that could break your heart -- but I do wish for a tighter film. If you've never seen it, go; it's just a matter of too much of a good thing. 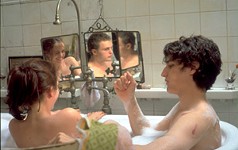