You've got to know that something's seriously wrong when you attend a movie on opening weekend and you're the only person in the audience. Especially when it sports Richard Pryor and Gene Wilder in the leads. This movie is not very good, but it's no flaming atrocity either. The movie is all premise: a pathological liar (Wilder) just released from an institution for the “mentally challenged” hooks up with an ex-con artist (Pryor). The two of them get sucked up into a really big and extremely convoluted lie that takes the rest of the movie to straighten out. The movie has a few good throwaway lines here and there but, on the whole, it just plods along. Even the talented Pryor, Wilder and Ruehl can't breathe any life into this thing. You've got to wonder why this movie was ever made. Was it a better looking script than the final product would lead us to believe? Or was it sheer desire to produce a knock-off of other successful Wilder/Pryor combinations? Director Phillips has had a successful career directing music videos and previously directed the incoherent feature Riders on the Storm. But he doesn't seem to have the stuff to make Another Silver Streak. 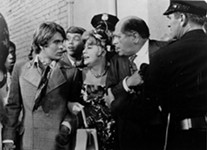 Wild in the Streets
Crazed screenwriter Robert Thom penned this AIP exploitation picture about what happens when the voting age is lowered to 14 and the new electorate votes in a fascist pop idol.