Superstar: The Life and Times of Andy Warhol

Warhol probably would like this movie. But that's not to say it's anything other than Workman-like. Superstar perpetuates all the enigmas Warhol so loved to shroud himself in. Warhol the mirror -- Warhol the sponge; Warhol the creative genius -- Warhol the huckster fraud. This documentary is a parade of one line interviews with various superstars and other luminaries, snippets of old news footage and film clips, splices of juxtaposed “now and then” material. It's packaged for minimal viewer exertion and attention span. Nothing ever gets too in-depth, no one ever sustains a thought past their 15 seconds of screen time. Now, of course if they're articulate (like Fran Lebowitz, Henry Geldzahler, Dennis Hopper) they can manage to convey something insightful or informative in their snippet of screen time. Superstar probably does manage to relate something of the flavor of the Warhol phenomenon, especially for people who've never bothered to peel back the labels on their Campbell's soup cans. But there's also something very spurious going on here. There are so many facets of Warhol's life that are barely (if at all) touched on: the drugs, the voyeurism, the Catholicism, the generosity, the homosexual aesthetic, the late society portraitist years, the invited guest at the Reagan inaugural. Warhol, to this day, is a paradoxical figure. And Superstar's major failing is its perpetuation of his supposed inscrutability. The movie speciously plays all ends against the middle, brooking no solid opinion of its subject. What director Workman does best in Superstar is cut together a swarming montage of orbiting figures. The movie's opening sequence, for example, is a brilliant swirl of counterpoised images that posit Warhol as the progenitor of modern popular and celebrity culture, as the master image freezer, or a genius at “fingerpointing” (as Hopper puts it). Workman is a masterful editor and, should there be any doubt of that, his earlier short film Precious Images is included before Superstar. The film, which was commissioned by the Directors Guild of America is a galloping tribute to the movies of our collective unconscious. Using split seconds of famous movies, Workman cuts these memories together thematically in a gloriously fun celebration of the movies of our lives. 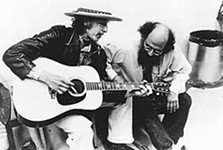 The Source
Even though you don't know it, you're probably already familiar with some of the work of director Chuck Workman. He's the one who's usually commissioned ...