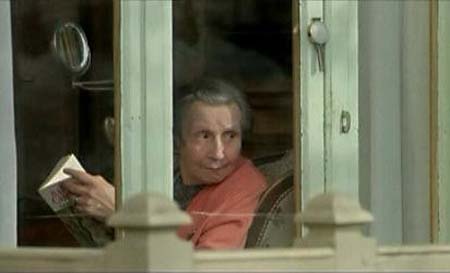 What is it with the French these days? Such dark little films they're sending us… Like the recent Baxter, Tatie Danielle is a skewed bit of black comedy, taking the ordinary -- in this case, the archetypal family aunt -- and putting a decidely nasty spin on it. Tatie Danielle (Chelton) is one of the most mean-spirited, downright foul-tempered screen relations to show up in a long time. Director Chatiliez (Life is a Long Quiet River) follows the cold-blooded but often humorous exploits of this evil aunt as she moves into the home of her nephew and his wife; her previous roommate, an elderly compatriot who took care of her every whim, recently died in a bizarre accident while cleaning a chandelier. Whether or not the tragedy was a direct result of Tatie Danielle is never resolved, but one has to wonder. Once situated in her new home, Danielle proceeds to drive everyone to the brink of insanity, her nephew's wife, in particular. She complains that the food is awful, the apartment is too small, the wallpaper is horrid, and on and on until the young couple are compelled to take a vacation. They leave their cantankerous charge in the company of a tough, no-nonsense house-sitter who may be more than a match for the old woman. Chatiliez keeps the settings modestly dark in keeping with the tone of the film; it's only when characters step outside into the streets of Paris that the film lightens up a bit. The question is, though, is this meant to be a comedy or not? The answer is hard to pin down, as the film moves from occasionally amusing scenes of Tatie Danielle giving W.C. Fields a run for his money in the dogs and children department, to genuinely disturbing shots of the old woman single-mindedly laying waste to her nephew's apartment while the couple is away on holiday. Chatiliez seems to be unable to make up his mind here, and as a result, the audience will have a tough time deciding whether to laugh or just feel depressed. Where is Jacques Tati when you need him?