A Thousand Pieces of Gold

In China, “a thousand pieces of gold” is a father's term of endearment for his daughter because that's the price she would fetch him if sold to a marriage broker. And indeed, that's where this movie begins: in the 1880s in Mongolia with a father who sells his two daughters in order to help the rest of the family through the drought. The story is drawn from the actual life experiences of Polly Bemis, born Lalu Nathoy. She's first shipped to San Francisco and bought by a young Chinese trader who delivers her to a mining camp in the American Northwest. Sold to a ruthless Chinese saloon keeper, she faces a life of forced prostitution. But our Polly has a will of her own and among the first English words she learns to say are “No whore!” which she declares frequently to all the brutish, sex-starved miners while emphatically flailing her arms in front of her. Her friend and ally is the kind and gentle Charlie Bemis who respects her and looks out for her and supports her desires. Gradually she is able to establish an independent business for herself as a laundress. The story is one of personal triumph over slavery and imposed destiny. Its drama is drawn from the infrequently examined history of the Chinese-Americans in the Gold Rush and the role played by women in those male enclaves. At points 1000 Pieces of Gold made me think of McCabe and Mrs. Miller with its realistic portrait of prostitution and the entrepreneurial spirit. Also the movie Heartland for its depiction of the isolation experienced by the pioneers of the American West and the difficulty experienced by the women drawn into that milieu. 1000 Pieces of Gold isn't quite as good as these other two movies, but one of the things they do have in common is their independence. Nowhere in these movies do you find the routine Hollywood myths about the building of the American West and it's no accident that these were all independent productions. Polly's personal story in 1000 Pieces of Gold is gradually subsumed by a focus on the growing love story between her and Charlie. There's also an interesting element of cross--culturalism because Polly must ultimately choose between her love for this man and her driving desire to return to her Chinese homeland. 1000 Pieces of Gold is a small story about real people and situations that has a genuineness and honesty but lacks dramatic tension. 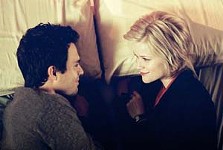 Just Like Heaven
This romantic comedy about a winsome, charming ghost and the man who loves her sidesteps abundant potential clichés through sheer dint of the acting skills on display.