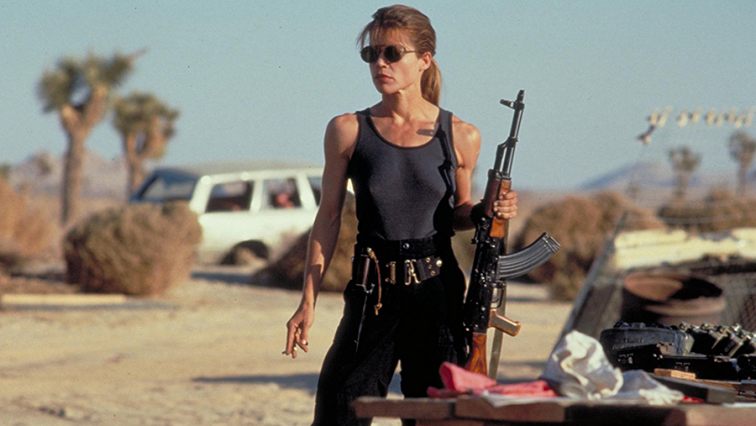 Rumored to have cost upwards of $88 million, James Cameron's latest magnum opus is by far and away the most expensive Hollywood movie ever released. Cameron ought to be used to monumental cost overruns by now -- his last film, the underwater epic The Abyss, suffered from the same financial extravagance. Regardless, the question most frequently on Hollywood lips these days is whether T2 will be able to recoup its costs at the box office. For what it's worth, though, I suspect he'll manage to squeak by. T2 takes up ten years after the events of the first film: it's now 1994 and this time, two Terminators have been sent back from A.D. 2029. One (Schwarzenegger) has been reprogrammed to protect the young John Connor (the future savior of all mankind, for all three of you who missed T1), and the other -- a T-1000 prototype Terminator (Patrick) -- programmed to kill the boy at all costs. John's mother Sarah (Hamilton) has been committed to a mental hospital, driven to the edge of madness by the terrible knowledge she gained in the first film. After springing mom from the psych ward, Schwarzenegger and Co. embark on a literally explosive flight from the technologically superior T-1000 Terminator. With computer-generated effects by LucasFilm's Industrial Light and Magic (and a thoroughly chilling performance by Patrick), the T-1000 is a screen villain with which to reckon. Made of liquid metal, the new Terminator is able to metamorphose into anyone and anything it comes in contact with, making it supremely lethal. ILM's effects are revolutionary, and I'll be suprised if they don't get an Oscar for this. At $88 million, I don't need to tell you the action scenes are fantastic. What is notable, though, is the amount of compassion invested in the film by Cameron and co-screenwriter William Wisher. There's a fairly well-drawn moral message in T2 that was more or less absent in the first film. When ten-year-old Connor tells Schwarzenegger that it's wrong to go around killing people left and right, the Austrian cyborg has no choice but to obey and from there on in, he only aims for the kneecaps. It's an ambitious film that sometimes gets ahead of itself action-wise, but Cameron is a relentlessly good action-adventure auteur who manages to pull it off once again, making what will doubtless be the single largest film of the summer. 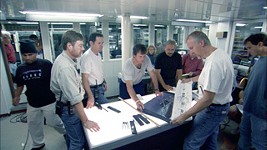