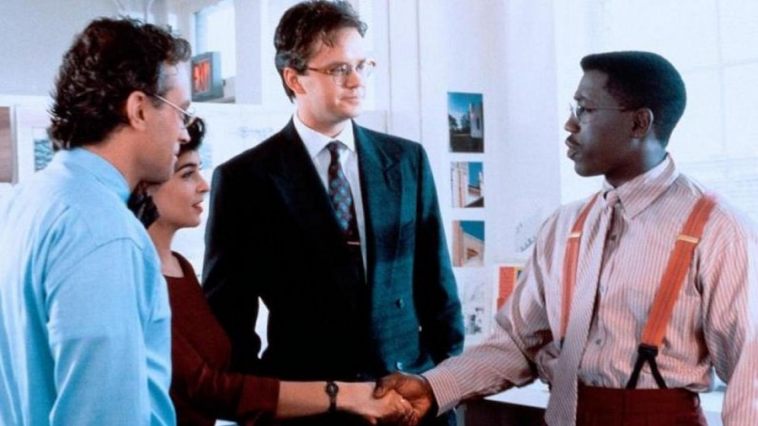 Spike Lee takes criticism to herat. He pays attention and he builds on it. That characteristic makes him perhaps the most interesting filmmaker working in America today. It also plays hell with Jungle Fever. Snipes plays a successful architect blessed with an idyllic family life who strays from the path with his beautiful temporary secretary Sciorra, who's from Bensonhurst of all places. What happens as these two people come together is a crack in their universes that exposes all the intersections of their lives. Sciorra's life at home is a hell devised by her brutish father and her brothers. In contrast, Snipes' family is genteel. His wife played by McKee has a glamorous high fashion job, his mother, Dee is a sweet and gracious woman and his father, Davis is a retired preacher. For a while there, just a short while, it looks a little easy, but we know Lee better than that, and soon enough he starts poking around in those cracks. Lee is never content to show one side of the picture and he attempts to address issues that he's not even convinced he's on the wrong side of. The most dramatic case in point is the war council, the gathering of women who rush to McKee's side when news of Snipes' perfidy gets out. In a wonderful staccato poem of age old grievances that begins with black women but resonates with all women, these characters pour out their anger, sadness, and determination. Lee admits that his actresses took that ball and ran with it in an adlibbed scene. “They just vomited it up,” he says in Newsweek. Likewise, Snipes struggles with his fall from grace wonders if he's “less down” because he's made it with a white woman. Lee, too, opens up dialogue with his critics who've questioned his reticence on the drug scourge that's ravaged his beloved neighborhoods of New York. Unfortunately, his answer to the critics, a fierce cry for the redemption of the black neighborhoods, is where this movie splits wide open. There are two powerful movies here, unfortunately, they don't coexist easily. Lee has to fight his way out and he opts for narrative stopping violence when perhaps he should have continued the dialogue. He's a man on a tightrope and it's hard not to watch him without worrying about him.