To his co-workers at the Tate Brewery, Renzo Parachi (Riley) is just another assembly line worker: quiet, efficient, average. To his rinkmates on the company hockey team, he's a worthy goalkeeper ready to shut out those incoming pucks. To Denise, Renzo's fledgling sweetheart, he's the best shot at romance she's seen in too many days, and to the gourmet mystery man Alonzo Turner (Coltrane), Renzo may very well be the impetus needed to fulfill both of their longstanding dreams. No real surprise there, unfortunately. Director Simoneau and screenwriter Paul Quarrington have fashioned a compelling and comedic film that thoughtfully examines the frail nature of hopes and dreams without lapsing into Capra-esque didacticism. Renzo is alone; he has no true friends, no real girlfirend, no solid relationships with anyone. While driving his father's cab late one night, he picks up and befriends the eccentric Alonzo, and suddenly nothing will ever be the same for either of them. Alonzo is an outgoing, corpulent hulk of a man, a renegade gourmet chef with an omnivorous appetite for life and all its pleasures: he's ten-thousand worlds removed from Renzo's plane. Opposites do attract, as the maxim goes, and before too long a singular friendship blossoms between the two men: half-forgotten dreams are suddenly close enough to taste, and self-imposed walls are crashing down all over the place. Riley's performance as the loner Renzo at first seems hesitant and unrealistic, overshadowed as it is by Coltrane's boisterously epicurean Alonzo, but before you can fault it, everything falls neatly into place just as it should. Director Simoneau and cast have cooked up an oftentimes hilarious portrait of life and what it means to really be alive. Perfectly normal? Anything but. 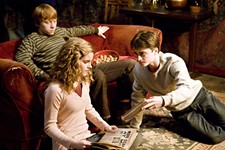 Harry Potter and the Half-Blood Prince
We're still wild about Harry, even though this new adventure prefers to flush pink with its lovesick teens than forward-thrust toward the mammoth battle of good vs. evil. 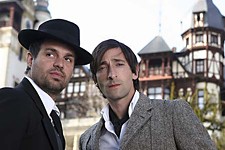 The Brothers Bloom
Adrien Brody and Mark Ruffalo are cast as the best con men in the world whose current swindle involves an eccentric heiress (Rachel Weisz) in this sophomore effort by the writer/director of Brick.