Rosencrantz and Guildenstern are Dead

Director and playwright Tom Stoppard reworked his original play for the screen, but nevertheless, it seems slightly dated, an absurdist remnant of the sixties. Confused and lost, they seem more to be waiting for Godot than on their way to Elsinore. But this is not a bad thing, it just makes Stoppard's play a bit of a curiosity. As for our two heroes without a clue, two of literature's greatest goofballs, things do not become much clearer when they meet a scruffy pack of players led by Dreyfuss who, for a few gold coins promises to put them into the action. The next thing they know, Rosencrantz and Guildenstern are at the court of Claudius and are being entreated by Gertrude to find out what's wrong with her son, poor, melancholy Hamlet. Offstage, around them, sometimes beside them, the story of Hamlet is being played out, but Rosencrantz and Guildenstern don't have a script and they are just at the fringes of the narrative. With horror, they realize that they don't even know which one of them is Rosencrantz and which is Guildenstern. Oldman is Rosencrantz, probably, and he bears much of the comedic load. Considerably more cheerful about things he doesn't understand than his old friend, Rosencrantz is also a bit thick. The charming Oldman is good at buffoonery. Guildenstern becomes angrier as he becomes more confused and he takes it out on Rosencrantz. Roth, last seen as Vincent van Gogh in Vincent & Theo, generally plays straight man to Oldman. Guildenstern never realizes how funny he is when he's trying to stay in control of events that he doesn't understand. It's the mysterious player who seems to have a sense of what's to come, and Dreyfuss, blessedly, is subdued. With all these plays within plays, we come closer to Shakespeare's fascination with illusion and reality and, oddly enough, to more modern sensibilities. However, the more absurdist elements of this play get exasperating after a while. I don't think audiences should be forced to ponder "what does it all mean" type questions for long stretches of time. It makes them mean. Luckily, Stoppard regains control by the end of the film. In this he is aided by his two actors. Rosencrantz and Guildenstern may be dead, but they do save the day. 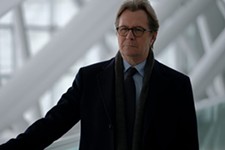 Crisis
Opiate addiction drama is too obvious and scattershot