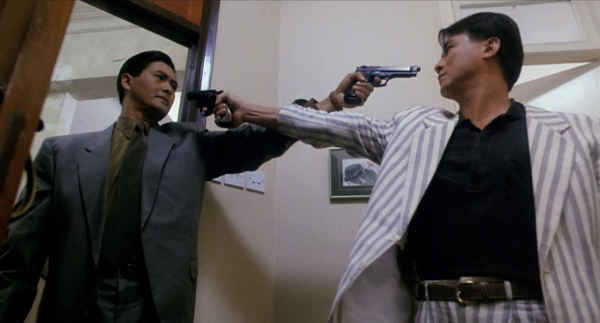 Love is strange; in The Killer, it's batshit crazy. This latest example of the irrepressible and amazing filmmaking that's been going on in Hong Kong is the best yet. Producer Tsui Hark is one of Hong Kong's most important filmmakers. Of the films we've seen recently in Austin, he directed the marvelous Zu: Warriors of Magic Mountain and produced both Chinese Ghost Stories. He is matched in stature by superstar Chow, Hong Kong's biggest box office draw. Woo has collaborated with Hark before and, according to the press notes, directed kung fu hero Jackie Chan's first major film, Countdown in Kung Fu. But all these credentials mean little when faced with this film that defies all categorization but demands comparisons, if only to prove that there's never been anything like this before. As most critics have noticed, the plot starts off as a retelling of Douglas Sirk's Magnificent Obsession with a young nightclub singer, Jenny (Yeh), accidentally blinded by a good-hearted, and coolly competent contract killer (Chow). But from there, we're off into a blood drenched ballet as choreographed by Sergio Leone and Sam Peckinpah. Where there's death, there's love. The Killer is so horrified by what's happened to Jenny, that he changes his ways. Nevertheless, the world being like it is, he still has to kill a few hundred people. He's pursued by a relentless cop, Danny Lee, who finds himself falling in love with his quarry, Chow. There are other ties between characters, and there are many more than one killer. In fact, the case can be made that love is no more healthy an activity for these characters than is killing for hire. In this universe, redemption comes from the barrel of a gun, and justice is a concept to be negotiated between individuals according to the situation. This is tragedy at its most hilarious and comedy to break your heart; sweet violence in a hellish fairy tale.