There's a lot right with this updated version of Charles Dickens' Oliver Twist, in which abandoned kitty Oliver (Lawrence) falls in with a streetwise band of canine pickpockets in Manhattan. Billy Joel (who performs a song early in the movie) makes a very respectable movie debut, lending his voice to the production as the fast-talking leader of the pack, Dodger. Dom DeLuise, his voice drooping with style, plays Fagin, the sadsack human “patron” of the group, with world-weary resignation. The Divine Miss M. is deliciously campy as the voice of a pampered poodle who controls the Park Avenue household that adopts Oliver. Cheech Marin gives the film some local color with his spunky interpretation of a likeable but hyperactive Chihuahua. So what's wrong with Disney's 27th full-length animated feature? Its biggest problem is that it's too short -- a cheap shot, I suppose, given the high cost of animated features. But the point is Disney's always prided itself on sparing no expense for the sake of a good story, and this one's pretty skimpy: The characters, though colorful, are not fleshed out, and the doggy pickpockets' milieu is given short shrift in favor of the show-off computer animation techniques that surround the villain Sykes (Loggia) and his digs. Worse, the movie suffers from a subtle but crucial failure to engage. The evil here, personified by Sykes, is pedestrian; He's too ugly and too mean to be really frightening. Danger's never clear and present, but rather a convention. Simply put, Oliver & Company didn't work for me not because I'm many years past my sixth birthday but because it never scared me into forgetting that fact. ///Excerpted from Marie Mahoney's Austin Chronicle review than ran when the movie was originally released.

My Brother's Keeper
Pray the PTSD away! 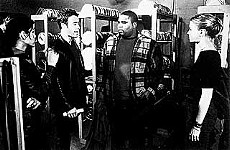 Urban Legends: Final Cut
Recently, in the Chronicle letters column, it was suggested that I was perhaps not the world's biggest fan of the horror film genre, based on ...