The Austin Film Society’s current series is devoted to films whose greatness serves as a tribute to George Morris, the Film Society’s mentor and “patron saint,” and a former film critic for The Austin Chronicle. A review of his is excerpted here.

“This is it folks – one of the genuine end-of-the-world movies. Like Raoul Walsh’s White Heat and Orson Welles’ Touch of Evil, Aldrich’s Kiss Me Deadly defends paranoia as the only rational attitude for a society living on the edge of the Bomb. It’s the definitive Mike Hammer movie, outsleazing even Mickey Spillane’s conception of the private dick as an amoral slob. As incarnated by Meeker, Hammer is a total loner, answering his remote-control phone only when he chooses, walking over the women in his life as if they were doormats saturated with fallout, and riding roughshod over witnesses and suspects whenever he needs a macho fix. There are few scenes in any movie as harrowing as Meeker’s finger-crunching encounter with Percy Helton’s morgue attendant or his insensitive handling of opera lover Fortunio Bonanova’s Caruso records. There’s a lot of violence in Kiss Me Deadly, and it all has that Aldrich energy. The director has never made a more extreme movie. It stretches the boundaries of the hard-boiled detective genre and also goes about as far as it’s possible to go stylistically without tumbling into total chaos. Aldrich fills the movie with oppressive close-ups that threaten to burst from the screen, lopsided compositions that come from every angle, and action sequences that assault the viewer with every blow. By the time we get to the end and discover the truth about the Great Whatsit, the Pandora’s Box that has precipitated the violence and death in the story, Aldrich has twisted the screws so tightly that we’re ready to jump out of our seats. Don’t miss it for the world.” – George Morris (1/25/85) 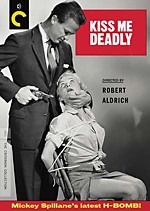 What Ever Happened to Baby Jane?
...