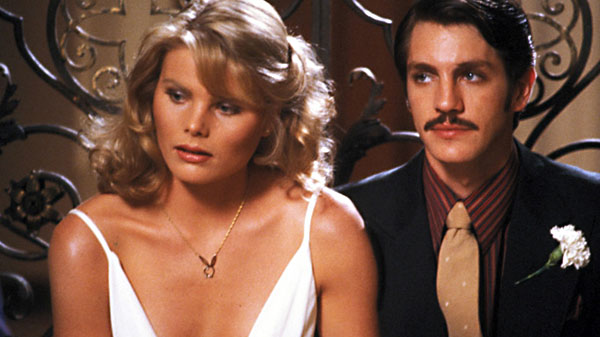 Everyone loves a good scandal. And Dorothy Stratten's brief life and sordid death at the hands of her unbalanced husband were certainly fodder for good gossip. The story of her rise from Dairy Queen counter girl to Playboy pet and hopeful movie star provided the material for Teresa Carpenter's Pulitzer prize-winning article "Death of a Playmate" a made-for-TV movie, and now Star 80. Add to the scandal the wseel-publicized breast enlargement undergone by Mariel Hemingway in her successful bid to win the coveted nymphet role. When all is said and done, director bob Fosse (Cabaret, Lenny, All That Jazz) delivers a sluggish movie that exhibits none of his usual flash and even less psychological drama (despite uniformly good acting and the4 inspired casting and performance of Carroll "Baby Doll" Baker). Star 80'S sole focus is the exploration of the sleazy repulsiveness of Stratten's husband/murderer Paul Snider. Stratten is portrayed as a tabula rasa foil for Snider's "Playboy" philosophy unwound, creating a dramatic situation in which Snider's relentless despicability is the only game in town. The movie is so unpleasant that it even dashes all hope for achieving the status of a wonderfully trashy movie that can be enjoyed despite one's better instincts. As the object of the fantasies of the dominant men in her life – Snider, Hugh Hefner, and director Peter Bogdanovich (who is carefully fictionalized in Star 80) – we are led to believe that Stratten's violent and untimely death was a crime against humanity, an act that has forever deprived the world of her beauty and destined stardom. This slant is the movie's greatest fallacy. Stratten's death and the violation of her corpse becomes a tragedy of lost promise that one suspects would be considered less tragic if she were an anonymous and average-looking murdered wife. Star 80 ultimately provides a simplistic glimpse of paradise lost and as a result of that focus, follows a trajectory that leads inevitably to necrophilic consummation.

Cabaret
Minnelli and Grey sparkle and the Fosse flash is everywhere in evidence in this winner of eight Academy Awards.