Travel tips for the Land of Enchantment

Within the boundaries of Pecos National Historical Park are the ruins of an ancient pueblo, remnants of the most famous trade route in the Southwest, a Civil War battleground, and the summer home of a Hollywood star. That’s a lot of colorful history in one small corner of New Mexico. 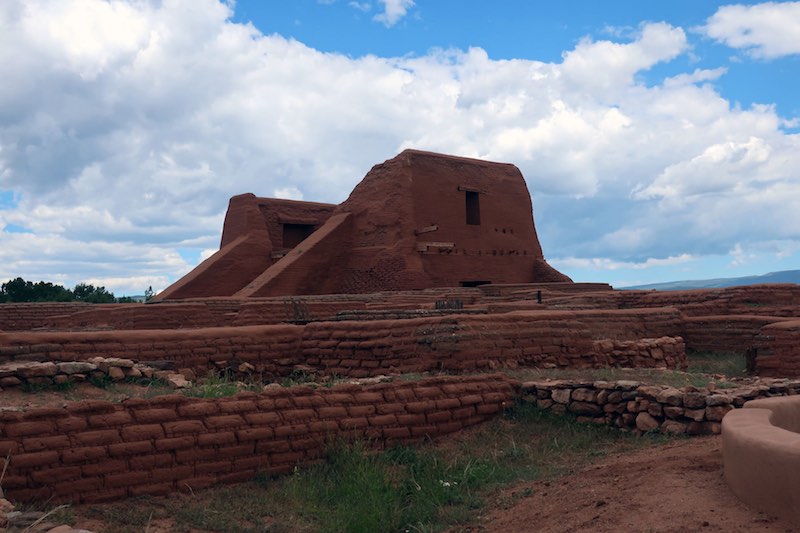 The red adobe brick walls of the mission church stand guard over the remains of a once prosperous Native American settlement. Rock walls outline where the convento once stood. (Photo by Gerald E. McLeod)

Glorieta Mesa towers over the southern horizon of the heavily wooded valley 27 miles east of Santa Fe, N.M. To the north, the peaks of the Sangre de Cristo Mountains gradually increase in size. Established in 1821, the Santa Fe Trail from Independence, Mo., winds through Glorieta Pass to its namesake western terminus.

Native people first settled on a ridge overlooking Glorieta Creek around 1100 AD. Spanish conquistador Francisco Vázquez de Coronado visited in 1540 on his quest for the Seven Cities of Gold. By then, the Cicuye Pueblo, which the Spaniards called Pecos, had grown to five stories tall, housing around 2,000 people. In 1619, Spanish missionaries arrived to build the first of four adobe brick churches just outside the city walls.

On the eastern edge of Puebloan territory, the community enjoyed trade with other tribes from around North America, but the location also made them vulnerable to raids by the Plains tribes. 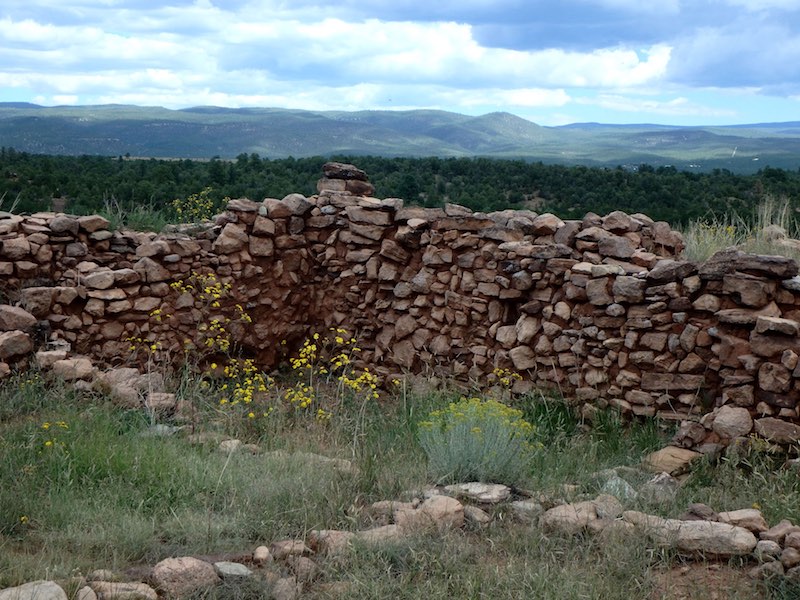 The fertile valley supported a rich agricultural and trading society that prospered until the 1780s. By 1838, the last of the residents moved and the rock-and-mud walls melted into the red soil. (Photo by Gerald E. McLeod)

First protected as a state historic monument in 1935, President Lyndon B. Johnson established the site of the Native American settlement as a national historic site in 1965. The park was enlarged in 1990 and again in 1993.

The trail behind the park headquarters leads to the ridge where the pueblo once stood. The remnants of the 300-year-old red mud-brick walls of the last church are the most dramatic sign of the once prosperous village. A low rock wall delineates the outline of the settlement. Underground kivas, small rooms that were either used for religious ceremonies or climate controlled workshops, are reconstructed reminders of the village.

From the high point of the pueblo ruins, the views of the surrounding mountains and mesas are majestic. It is easy to see why the First Peoples would select such a site as their home. 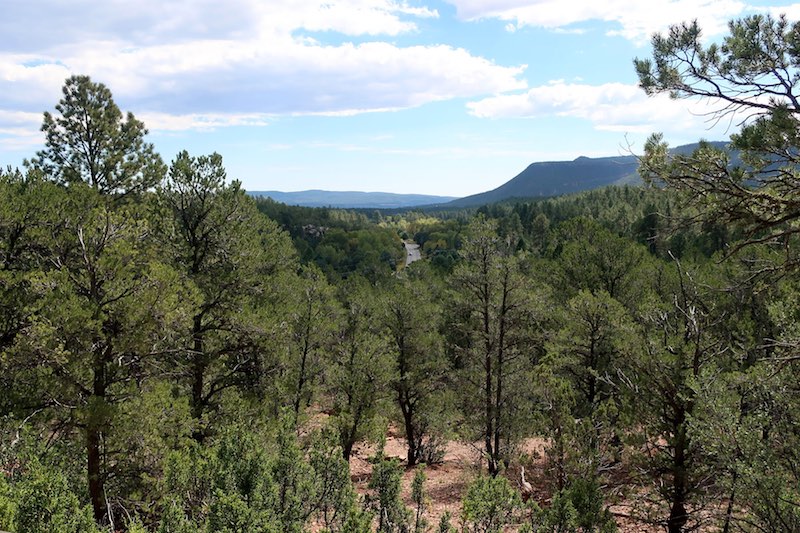 From their headquarters camp on Windmill Hill the Confederates had a clear view of the Santa Fe Trail and the Union Army’s position. Historic Route 66 paved the trail over Glorieta Pass. (Photo by Gerald E. McLeod)

In the first year of the Civil War, the Confederates had grand plans of building a new nation based on cotton and human bondage. Few Southerners dreamed as big as Gen. Henry H. Sibley.

The Louisiana-born brigadier general recruited an army in South Texas with plans of capturing the Southwest, all the way to the California coast, for the Confederacy.

The army of Texans met little resistance as it overran Federal Army forts in West Texas. The first real fight came south of Albuquerque at Fort Craig, N.M., where Col. Kit Carson and a ragtag army of volunteers and Union soldiers repulsed the attackers. Sidestepping the fort, the Confederate army won the Battle of Valverde before capturing Albuquerque and Santa Fe.

The next prize was to be the large military storehouses at Fort Union outside of Las Vegas, N.M., before marching on to the gold fields of Colorado. The two forces of approximately 1,200 men each met in the valley of Glorieta Creek. The armies were concentrated in a tight space littered with large rocks and thick forest with little room to maneuver. (Photo by Gerald E. McLeod)

In three days in March 1861, the armies fought to a stalemate with the Federals making calculated retreats to more defendable positions. The tide of the battle changed when a Federal force made a flanking attack over Glorieta Mesa to destroy the Confederates’ lightly guarded supply wagons.

Without food, ammunition, medicine, and blankets, the Texans were forced to retreat back to Santa Fe. From the territorial capital, and with Federal troops in pursuit, the Confederates followed the Rio Grande back to Texas.

The Battle of Glorieta Pass is often called “the Gettysburg of the West” because it was the high-water mark of the Confederates’ invasion into Union territory. Two of the Texas generals at the battle, William Scurry and Tom Green, went on to fame and death at other Civil War battles and had Texas counties named in their honor.

The Glorieta Battlefield became part of the Pecos NHP in 1991. A 2.25-mile circular hiking trail goes across the hills that saw the heaviest combat, with metal signs describing the fight.

Although the muddy fields have become overgrown and I-25 separates part of the battleground, the rolling terrain is much the same as it was in 1861. New Mexico Highway 50 roughly follows the path of the Santa Fe Trail through the battlefield area.

The battlefield is about five miles west of the park headquarters. Visitors must obtain an access code at the visitor center to enter the gate. 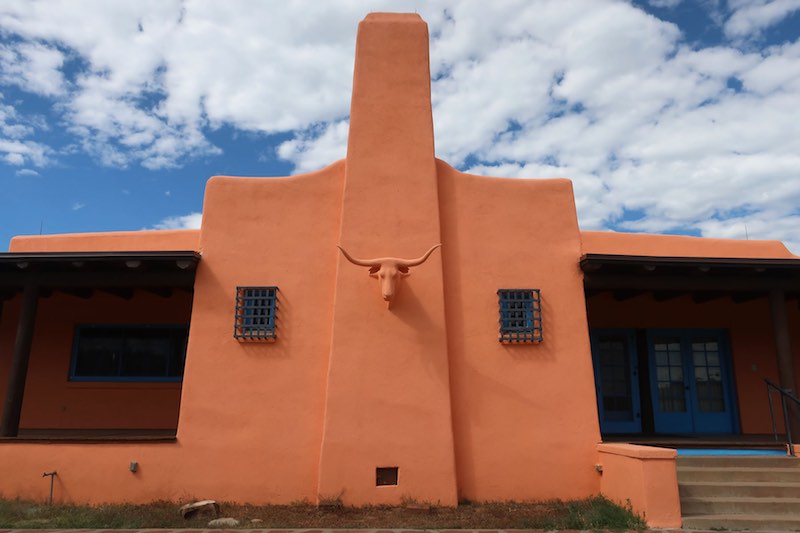 Actress Greer Garson and her husband Buddy Fogelson used the ranch house as a summer home. The longhorn head that greets visitors from the chimney was supposed to go in the lobby, but was too big. (Photo by Gerald E. McLeod)

Hollywood Comes to the Hills

During the Civil War battle, the Federal army established its headquarters camp and hospital near Kozlowski’s Ranch and Stage Station. The adobe building that housed the store is all that is left of the waystation on the Santa Fe Trail.

In 1925, a promoter named Tex Austin created the Forked Lightning Ranch at the site. Known as the “King of the Rodeo,” Tex, whose real name was Clarence Van Nostrand, brought the Wild West to cities around the world with his traveling rodeos.

Tex advertised the ranch as a real, working cattle operation and charged city slickers $136 a week to participate in cattle drives. Guests stayed in the square, flat-roofed hacienda, with an open courtyard in the center.

Buddy turned the Lightning Fork into a summer home and cattle ranch. The couple used two former guest rooms in the former hotel as offices and still had plenty of space for their famous guests. The trail behind the house leading down to the confluence of Glorieta Creek and the Pecos River was named for Garson’s mother.

In the 1980s, the Fogelsons gave land around the pueblo to the national park as well as money to build the E.E. Fogelson Visitor Center.

After Buddy (1900-1987) died, the ranch was split between his two heirs. Garson considered selling her portion to a developer, but public outcry persuaded her to sell to The Conservation Fund. The organization then donated the property to the national park. Ranger-led tours to modest home happen twice a week.

Just a drive through Glorieta Pass is an experience. The mountain walls with curtains of pine trees are a welcoming entrance to Santa Fe. It is amazing that so much history happened such a short distance from the interstate highway. Mission of Our Lady of the Angels of Porciúncula, Pecos National Historical Park, New Mexico. (Photo by Gerald E. McLeod)

Pecos National Historical Park is 27 miles east of Santa Fe, N.M., off of I-25. The park headquarters and the pueblo ruins are north of the interstate highway on NM-63. Entrance to the park and the guided tours are free. Travel a portion of the original Santa Fe Trail and Historic Route 66 by driving NM-50 between the towns of Pecos and Glorieta.

It is worth the time to tour the small museum at the E.E. Fogelson Visitor Center. Allot about two hours to walk around the pueblo ruins.

The 2.25-mile battlefield trail is five miles from the headquarters. The code to the gate is free at the visitor center’s gift shop. The hike is moderate-to-easy on the groomed trail, with several short inclines. Budget about two hours to walk the entire path and read the signs. In March, volunteers commemorate the battle with a Civil War Encampment at the park.

Ranger-led tours give a deeper understanding of the pueblo ruins and the Glorieta Battlefield. Tours of the Lightning Fork Ranch house are usually on Saturday and Monday. All tours are subject to weather conditions, and schedules change with the seasons. Consult the park’s website or give them a call to confirm times.

In early August, the park celebrates an annual Feast Day to Nuestra Señora de los Ángeles (Our Lady of the Angels), the patron saint of the Pecos Pueblo. Descendants of the last residents make the pilgrimage from the Pueblo of Jemez to the ruins of the mission church for the festival.

Pecos National Historical Park
1 NM-63
Pecos, N.M. 87552
505/757-7241
www.nps.gov/peco Gerald McLeod has been traveling around Texas and beyond for his "Day Trips" column for more than 25 years. Keep up to date with his journeys on his archive page. 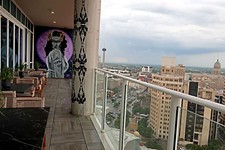