A trip to Sturgeon Bay

In Wisconsin, fishing heats up when the bay freezes over. 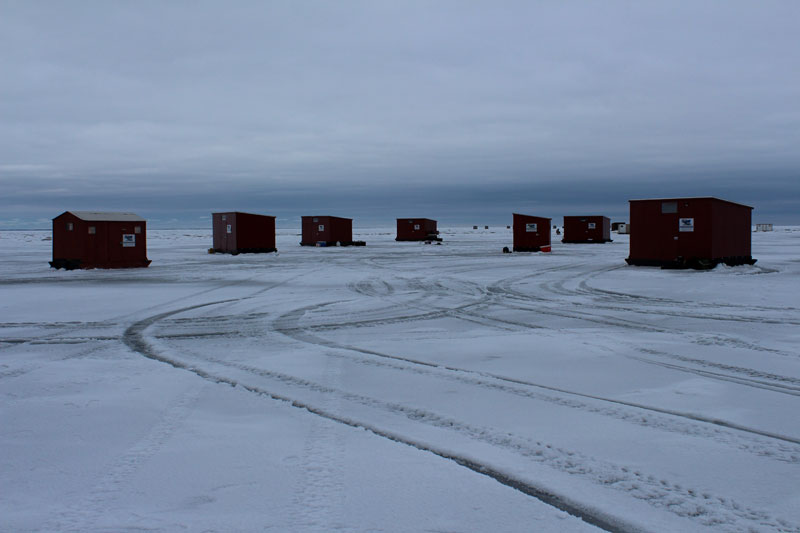 Ice fishing shanties congregate over the best fishing spots on Wisconsin’s Sturgeon Bay. The average hut is pretty basic, but they all have a heater to keep the anglers comfortable. (Photos by Gerald E. McLeod)

The cold wind was sharp as a whip on exposed flesh with nothing to slow it down on the frozen bay. The landscape was bright white except for the dark bluffs of the shoreline in the distance and the iron-gray sky. Tire tracks in the snow from the ATVs had turned to ice and reflected what little sunlight filtered through the thick clouds.

Ice fishing on Wisconsin’s Sturgeon Bay has changed a lot from image of old-timers sitting on an upended bucket in the below-freezing wind. “This truly is a Wisconsin tradition that has been passed down through the generations,” says Capt. JJ Malvitz, the owner of JJ’s Guide Service (he pilots a fishing boat during the summer months). “The equipment has evolved over the years to where it’s pretty high-tech with depth finders, fish finders, and GPS, but it’s still very much man against fish and many times the fish win. But we’re more comfortable now than our fathers and grandfathers ever were.”

Ice Fishing Can Be So Unfair

About three dozen or so ice shanties are clustered together in a haphazard village about two miles offshore near the town of Sturgeon Bay. A group of four fishermen in one shanty were well on their way to the 10 fish per person limit with more than two dozen whitefish between them pulled from the frigid water. A few yards away, another group had hooked only two of the slender fish. Everyone was still enjoying themselves, especially when the hot bratwursts and cold New Glarus and Old Style beers were passed around.

Most of the shanties are little more than rectangle plywood boxes towed across the ice behind an ATV to the site. Benches built into the short sides of the huts give the fishermen an unpadded place to sit. A hole about the size of a dinner plate drilled with a posthole augur through the 12- to 24-inch thick ice at each corner of the ice floor gives access to the water below. 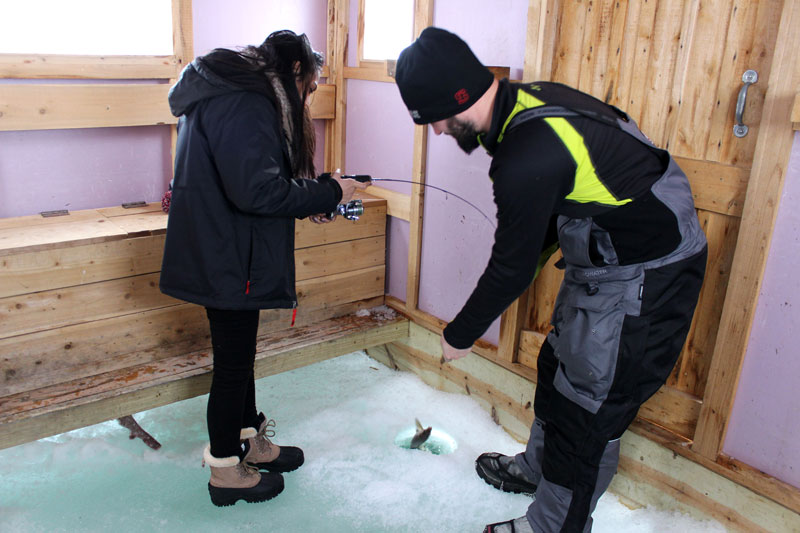 Fishing for whitefish requires a light touch as you gently bounce the jig off the bottom of the bay. The trick is knowing when to set the hook. Waxworms or grubs are popular bait.

Just getting out of the wind makes the subzero temperature bearable, but the single, small propane heater warms the rustic shanty to toasty comfort.

Like any sport fishing, ice fishing for whitefish is a matter of patience. Using a reel and rod about a yard long, the angler lets out enough line to drop the hook the 50 to 70 feet to the rocky bottom. Then they bounce the jig until they feel the dead weight of the fish on the line.

Early and late in the day, anglers try their luck through the ice for walleye, another tasty local fish.

Sturgeon Bay reliably has a thick layer of ice from January to March. Coming from out of state, unless you know a local, the easiest way to get connected on the ins and outs of ice fishing is with a licensed guide. And, of course, you’ll need a state fishing license.

There are half a dozen services on the upper Door County Peninsula, but one of the best is JJ’s Guide Service (www.jjsguideservice.com). For as little as $100, Capt. Malvitz (in the summer he pilots a fishing boat instead of an ATV) supplies everything you need for a day of fishing on the ice. Renting just the heated ice shanty costs $50 per person for the day. 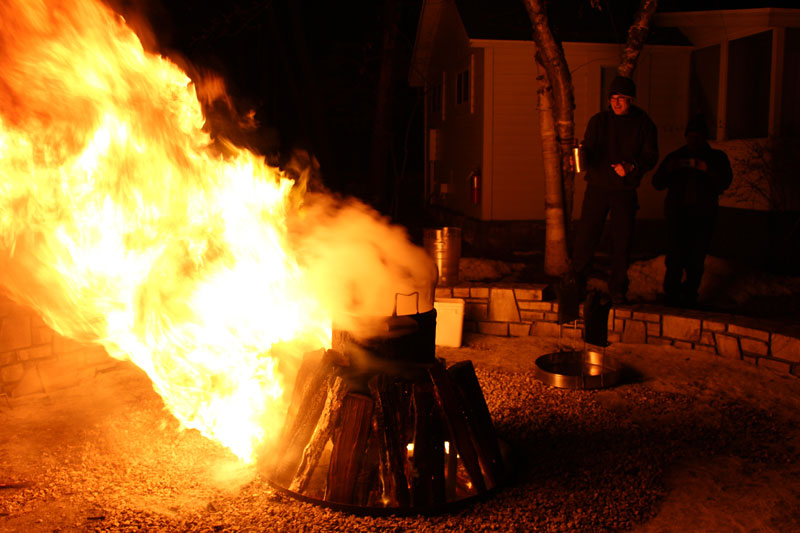 Half of the fun of a fish boil is gathering around the bonfire waiting for the whitefish, potatoes, and onions to cook. Locals says the tradition originated when fishermen began trading part of their catch for firewood.

Another Door County, Wisconsin, custom is the Lake Michigan whitefish boil. During the summer, fish boils are regularly held on a beach or in the backyard of a restaurant. During the winter, only the White Gull Inn (www.whitegullinn.com) in Fish Creek serves the traditional meal.

The cook builds a bonfire and places a large pot of water on to boil with potatoes and onions. When the potatoes are almost done he throws the whitefish into the pot. Just as the fish are nearly cooked, he throws extra kerosene on the fire to send the water roiling over the side. This removes the layer of oil on top of the water cooked out of the whitefish, giving the crosscut chunks a cleaner taste.

Whitefish are a tasty, delicate white meat, but have a bony ribcage that needs to be removed from the cutlet before eating.

An interesting note, the whitefish were nearly run out of Lake Michigan by invasive zebra mussels. Imported in ship ballast water from Asia, the mussels have changed the ecosystem of the lake. The native whitefish moved into Green Bay where they have proliferated.

If you visualize the shape of Wisconsin as the backside of a left-hand mitten, the Door County Peninsula is the thumb above the town of Green Bay.

The peninsula is about 80 miles long with Green Bay (the body of water) on the west and Lake Michigan on the east side. Door County is the upper portion of the land mass.

Until the Sixties, this was a very rural and agricultural area. For decades the county was known as “Cherryland, USA” because it produced more cherries than any other place in the U.S. Since tourism became the primary industry on the peninsula, the Wisconsin cherry production has dropped behind the producers in Michigan.

In the mid-Sixties, Chicagoans and others from warmer climates discovered Door County’s mild summers in droves. From May to October the 19 scenic villages along the county’s west coast can become inundated with visitors. The peninsula is big enough that all those people can spread out pretty well on the beaches and trails. The crowds tend to happen around the boutiques and restaurants on the west side of the peninsula. Locals call the east side the cooler and quieter side.

The county’s name comes from the rocky shoals between the mainland and Washington Island off the northern tip of the peninsula. The French translated the Native American name as Porte des Morts or “Death’s Door.” It is said that more ships have gone to a watery grave in the shoals than any other freshwater pass. 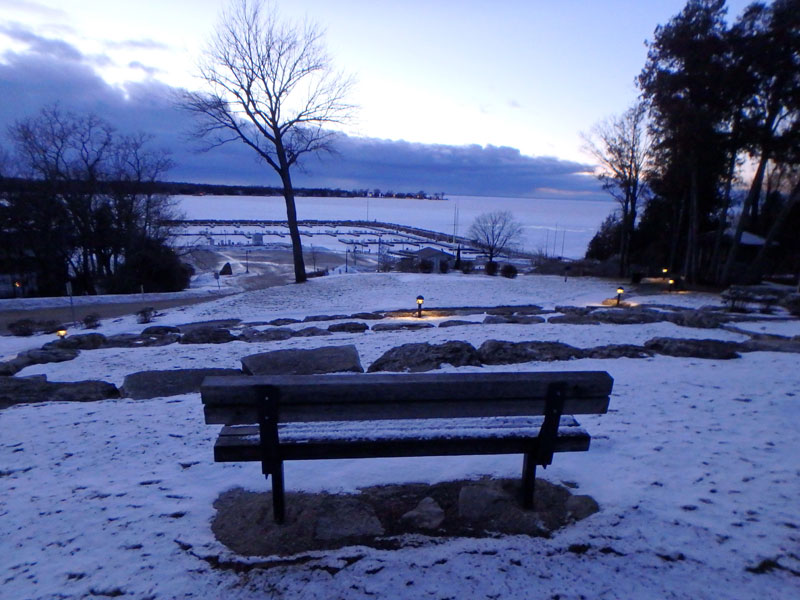 December through March, the upper end of the Door County Peninsula is covered in a layer of snow. With miles of trails, winter sports are a popular attraction for locals and visitors.

In addition to being a world-renowned summer destination, Door County is a winter playground without the elevation issue and the crowds of mountains.

Snow blankets the county for much of the winter. The trails in the state and county parks on the peninsula are converted from hiking and biking to snowshoeing, cross-country skiing, and snowmobile trails. Although the amount of snow needed for winter sports can’t be guaranteed, it is almost always a sure bet that Sturgeon Bay will freeze and the whitefish will be biting, at least in some ice shanties.

The Whistling Swan Inn: The oldest inn on the peninsula, has limited number of rooms over the restaurant owned by folks with Hinterland Brewery of Green Bay. Fish Creek, Wis., www.whistlingswan.com

Sister Bay Bowl: Try the locally caught fish and signature Old Fashioned. Has a bowling alley in the back. Sister Bay, Wis., www.sisterbaybowl.com