Swimming with the animals

This summer SeaWorld in San Antonio opened Discovery Point, a chance for guests to don wetsuits and wade into the pool with the male Atlantic bottlenose dolphins. 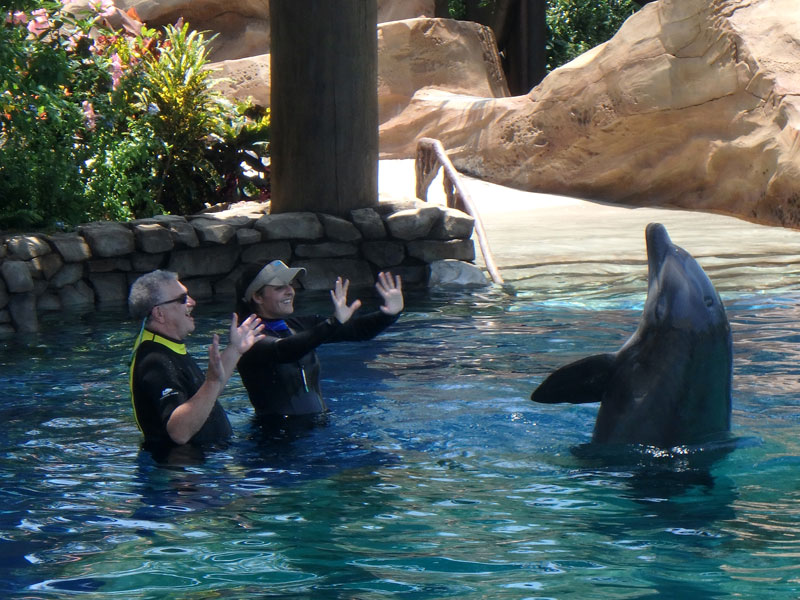 Fathom is a real charmer. The 18-year-old dolphin in SeaWorld’s new dolphin encounter pool seemed as curious of the humans who waded out to meet him as they were of him. Up close the 8-foot-long dolphin’s skin is darker than it appears from a distance. His skin feels like slick rubber.

Jeanie, Fathom’s trainer, explained that the San Antonio theme park has 21 bottlenose dolphins, including Fathom’s 50-year-old father. Dolphins are naturally curious and have very individual personalities. At any time during the encounter, Fathom was free to wander off, but he always came back for a fish treat and a little belly rubbing.

Two-year-old Gilly, one of Fathom’s pool mates, was a rescued dolphin from the Texas coast. He was found tangled in a gill net near Mustang Island. After being nursed back to health, it was determined that Gilly wouldn’t be able to be released back into the wild because he had become too accustomed to humans.

More Than a Water Park

Chris Bellows, vice president of zoological operations at SeaWorld San Antonio, says the Texas facility has been involved in more than 28,000 animal rescues. SeaWorld works closely with the Texas Marine Mammal Stranding Network. “Our goal is to rescue, rehabilitate, and return the animal to the wild whenever possible,” he says.

Recently, SeaWorld personnel were involved with a dolphin rescue in the Sabine River just above Beaumont, Bellows said. Two young male dolphins were spotted much farther up the river than dolphins normally go. By the time wildlife experts got to the pair to try to coax them back to the coast, one of the two had been killed by an arrow. The other would not leave its friend’s body. The team from SeaWorld helped catch the young dolphin from the brackish water. “He was tagged and released in the Gulf off Sea Rim State Park,” Bellows said.

Bellows, who has worked for SeaWorld for 34 years, says most of the key staff has been with the organization for many years. “Taking care of the animals means hauling a lot of poop,” he says. “But it’s an experience of a lifetime and a passion for most of us.” 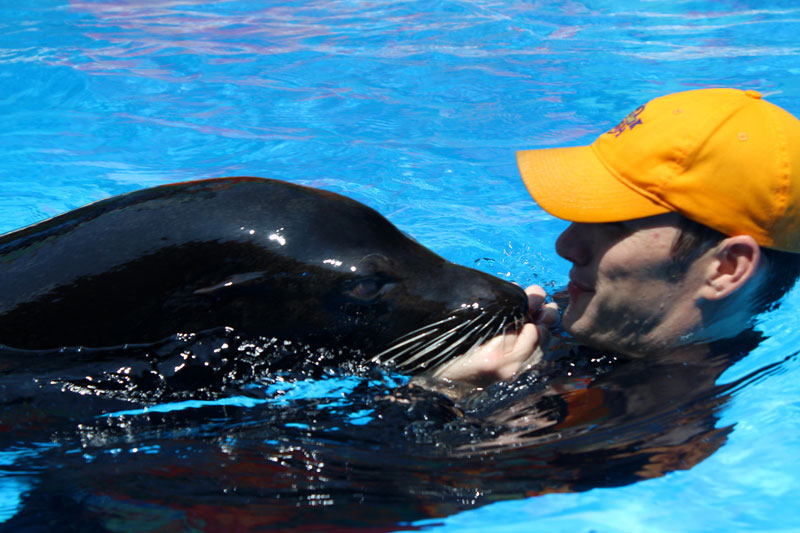 Clyde the sea lion acts like a cross between a large puppy and a rambunctious teenager. He and Matt, his trainer, make their work look like play.

Making Friends With the Mammals

SeaWorld adds the dolphin program to other visits that allow one-on-one contact with the sea lions and beluga whales. Each is more than a meet-and-greet. Guests actually learn about the animals and develop a greater appreciation of their beauty.

At the sea lion tank, Jason and Matt were excited to tell visitors about the sleek animals. The water is colder than at the dolphin tank and the sea lion was rambunctious, like a jittery pre-teenager. “People like it when the sea lions exhibit a little bit of their personalities during the shows,” Matt said as he stroked Clyde, the friendly sea lion. “Sometimes they have a mind of their own.”

The black sea lion with large white whiskers was almost puppy-like in his behavior as he swam back and forth, checking out the new humans at the tank. He and Matt were like playmates as they swam together around the pool.

The sea lion has thick, coarse fur, kind of like a short-haired dog. The fish treats that Matt tossed were positive reinforcement. The chubby guy looked like he had never missed a meal of a bucket of fish. Matt says that the day for the sea lions is always something different. Some days they’re in the show, then some days they're not. “We mix it up. No two days are the same for them,” Matt says. 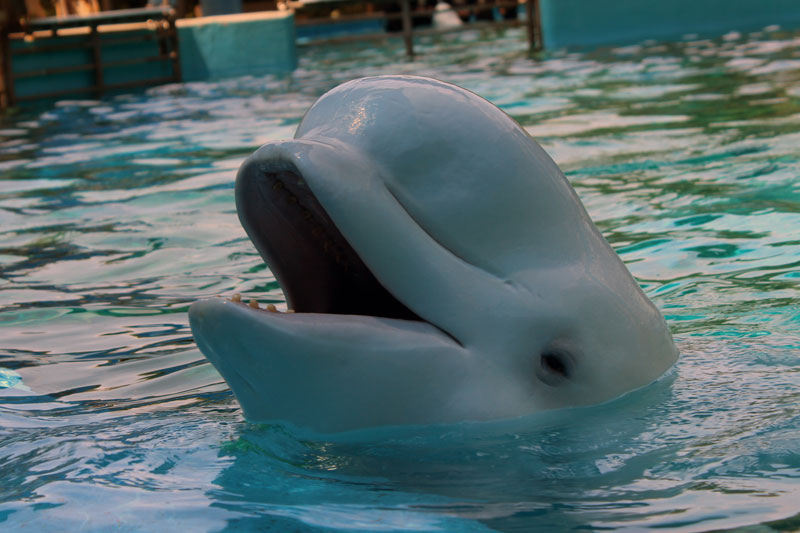 It is hard to know what a beluga whale is thinking with their perpetual smile. They are very social animals and can be very comical with their facial expressions.

At the beluga whale tank the large whales were as curious as their dolphin cousins. A group of guests was in the water with a cream white beluga. SeaWorld San Antonio has seven belugas ranging in age from 2 to 38 years old. That big bulb on their forehead is soft and squishy. This is part of their sonar system to identify prey.

Getting to meet these beautiful animals up close is an amazing and exhilarating experience. Besides the animal shows, the park offers amusement park rides and aquariums. The animal encounters cost in addition to park admission.