Gulf Coast vacation destination only feels like an island

The Alabama coast packs a lot of vacation and great seafood into a short distance. 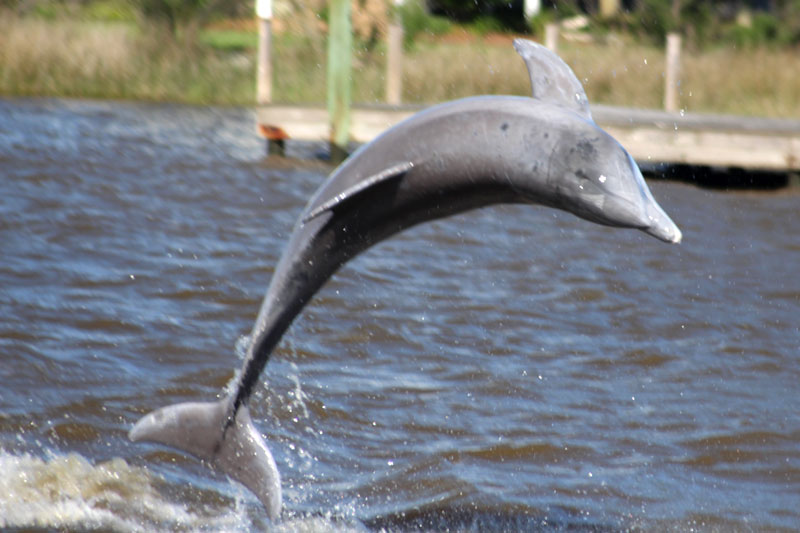 The southernmost land of Alabama is known for its native wildlife, beaches, and vacation amenities. (Photos by Gerald E. McLeod)

A 36-mile-long peninsula that is part of the hanging chad off the bottom of Alabama was sliced off from the mainland by the Intracoastal Waterway. The sickle-shaped peninsula that stretches across the eastern half of the mouth of Mobile Bay is technically an island surrounded by bays, lagoons, and more than 30 miles of pristine beach on the Gulf of Mexico. A coastal playground has been carved out of what was once entirely a natural barrier of dunes and forest.

The Alabama appendage extending off the western end of the Florida panhandle not far from Pensacola was once considered almost inaccessible by the Sunshine State. With plenty of sun-bleached beach up and down the coast, Florida saw no need to spend the money on a bridge over Perdido Pass to access the sand of the southern Alabama peninsula. Instead Florida ceded two miles of their sovereign territory and beach to Alabama. Their mistake.

The once quiet Alabama peninsula known for its fishing villages between Perdido Pass and Fort Morgan has become a vacation destination with towns of Gulf Shores and Orange Beach at the heart of the playground. The peninsula is connected by a bridge at the Florida end and the ferry to Mobile on the western end, with a system of highways stitching it all together. In the typical fashion of neighboring Florida, most of the major roads on the Alabama side are fenced off from the beach by high-rise condos, hotels, and strip malls. 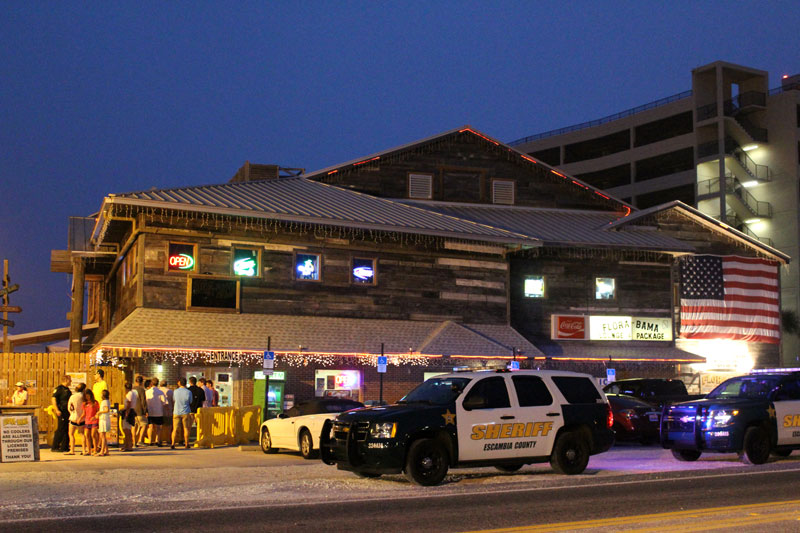 Since 1964, the Flora-Bama Lounge and Oyster Bar has been party central at the eastern gateway to the Gulf Shores/Orange Beach peninsula of southern Alabama.

On Sept. 16, 2004, Hurricane Ivan scored a direct hit on Gulf Shores. The coastline scoured by wind and waves attracted new and bigger construction projects to replace the damage.

One of the last vestiges of the old Gulf Coast to survive is the Flora-Bama Lounge and Oyster Bar, a roadhouse at the state line that has seen more revivals than a backwoods Alabama Baptist church. The two-story wood structure has been blown away and rebuilt so many times that the only thing original is the safe in the concrete floor.

The Flora-Bama opened in 1964 to sell beer, booze, and snacks to the hippies and fishermen who made the out-of-the-way journey to this section of the coast. Despite hurricanes, floods, and fires, the unpainted wood shack survived and its fame enlarged by a succession of owners.

Hurricane Ivan was nearly the last straw. The building was flattened, but owner Pat McClelland and the staff kept the legend alive by selling beer and snacks out of a trailer as they figured a way to rebuild from the stack of driftwood and lumber.

“I had most of the wood marked so we knew where it went,” Pat said. “That is if we could find the pieces after Hurricane Ivan.”

Today, Flora-Bama is a reminder of what the Coast used to be – simple places with a distinctive local flavor. Often listed as one of the best old-fashioned roadhouses and one of the best beachside honky-tonks in America, it is a must-see for visitors. With three stages, countless bars, and several kitchens, it is the place for music and snacks with access to the beach from their potholed parking lot.

Flora-Bama puts its own spin on a cocktail recipe imported from the U.S. Virgin Islands and popular on the Gulf Coast called a “Bushwhacker.” The drink is an adult Slushy with lots of rum and a cherry on top. “It’s called that because it sneaks up on you,” Pat says.

Across the street from the roadhouse, the Flora-Bama empire includes two top-notch restaurants, a marina, and a former Kentucky Fried Chicken that was turned into a liquor store. 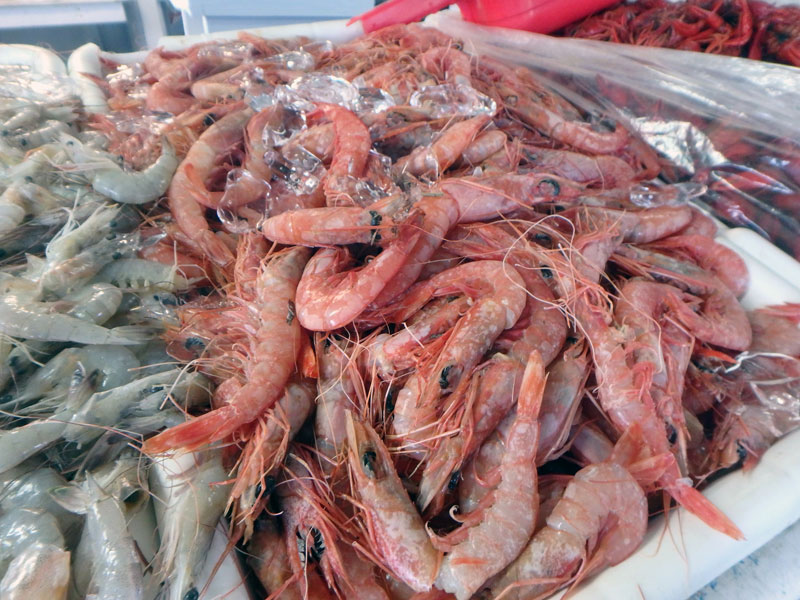 The Gulf Shores area does seafood right. With a large fishing fleet based nearby, the seafood restaurants do an excellent job preparing the variety of catches. A local delicacy is the extra-large Royal Red shrimp that appear on almost every local menu.

Executive Chef Chris Sherrill expands the normal range of Gulf Coast seafood to include nuisance species. He regularly adds locally caught invasive species like tiger fish and lionfish to the menu. A group of local chefs has joined together to create a market for local ingredients that help control the population of species that are harmful to the local environment.

By and large, the seafood in the Gulf Shores and Orange Beach area is as good and fresh as you can get anywhere. One resident described the seafood as “slap-your-momma good.” There are a lot of really good restaurants to feed all the visitors to the beaches.

• DeSoto’s Seafood Kitchen, a favorite with locals for lunch and dinner • The Gulf at Perdido Pass has beachside outdoor dining; the burgers are famous and the seafood is awesome • Villaggio Grille in the Wharf Resort offers excellent high-end dining • Wolf Bay Lodge at Zeke’s Marina in Orange Beach is a family restaurant overlooking the boats • Lulu’s is Jimmy Buffett’s sister Lucy's famous restaurant on the Intracoastal Waterway • Tacky Jack’s is part beach bar (without a beach) and part casual dining with a Cajun flair • Billy’s Seafood sells fresh seafood right off the boat, and the prepared Cajun crawfish is amazing

One of the local delicacies is giant shrimp called “Royal Reds.” Local shrimpers discovered the jumbo crustaceans around warm water vents off the continental shelf in very deep water. Usually served as peel-and-eat, the bright red shrimp are meatier and sweeter than their shallow water cousins. 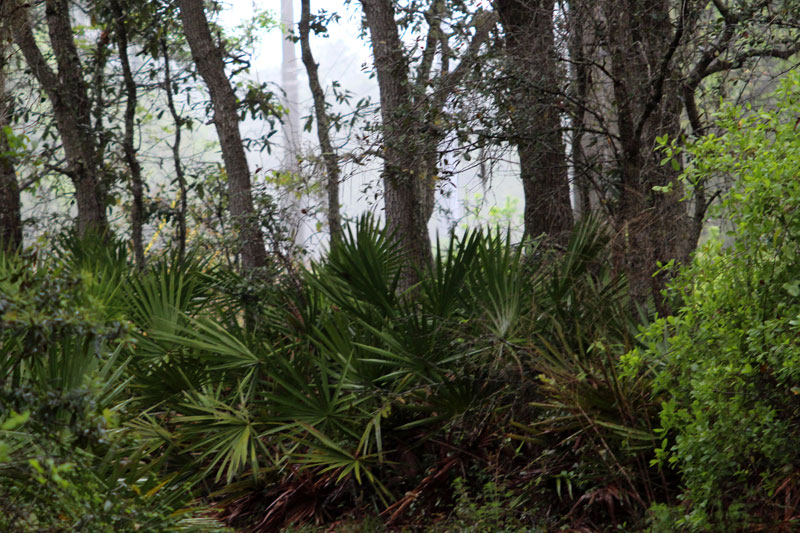 Although much of the peninsula is taken over by businesses that cater to the tourist trade, there is still a significant portion of the land set aside as nature preserves.

The Alabama State Parks department is fighting back the rising tide of development by keeping public access open to the gorgeous beaches through pocket parks between resorts and condominiums. The 6,150-acre Gulf State Park is a mixture of the shoreline, nature, and vacation amenities.

If you want to see the Alabama coast in its most natural state, venture over to the Bon Secour National Wildlife Refuge on the eastern end of the peninsula. The five units of the natural area are the last refuge of native endangered species and undisturbed forests. This is a major birdwatching spot and a nice place for an undisturbed walk in the woods.

The wildlife refuge gets its name from the nearby Bon Secour River that empties into the southeast corner of Mobile Bay. French pirates called the river “safe harbor” and used it as a hiding place to repair their ships. Today the short river is home to a fleet of shrimp boats and vacation homes.

The hidden coast of Alabama has a lot to offer whether you’re looking for relaxation or adventure. There are lots of ways to see the beauty of the peninsula, you just have to find what appeals to you. “This is really a great place to live,” a local said. “Especially after September.”