Musical multiple threat Valerie June at ACL Fest 2013. A regular on Austin's music stage, she'll also be one of the speakers at SXSW 2023. (Photo by John Anderson)

Radical filmmakers and tech CEOs, prepare to rub shoulders again as South by Southwest has announced more speakers for its 2023 edition (March 10-19).

The hybrid movie, music, technology and culture extravaganza had already released a first round speaker list including Indeed CEO Chris Hyams and Molly White (the comedic genius behind "no need to satirize what's already crazy enough" website Web3 is Going Just Great), and an initial playlist of musical acts hoping for their breakout moment.

Now it's added a slate of speakers from the entertainment industry, including Palme D'Or-winning French filmmaker Julia Ducournau, who has reinvigorated body horror with her first two films, Raw and Titane. On the music side, there's singer, multi-instrumentalist, Grammy-nominee and SXSW 2017 alumnus Valerie June. And covering all bases - comedian, actor, musician, and Chicano arts and culture activist - the legendary Cheech Marin.

On the tech side, look for sessions with journalist Kara Swisher (aka the Musk Whisperer) and her cohost of the Pivot podcast Scott Galloway (can a live recording be out of the question?), IBM CEO Ginni Rometty, and 23andMe cofounder and CEO Anne Wojcicki.

The schedule also adds another keynote: Ryan Gellert, CEO of outdoor gear company Patagonia. Earlier this year, founder Yvon Chouinard transferred ownership to two new entities, the Holdfast Collective and the Patagonia Purpose Trust, dedicated to fighting climate change rather than creating new billionaires, making it one of the biggest companies in the world putting its eco-money where its mouth is.

Among the local names on the list is William Hurley, aka Whurley, founder of Chaotic Moon Studios and now working to democratize quantum computing through his Austin-based firm Strangeworks. It'll also be a short commute for UT Austin professor of chemistry Dr. Kate Biberdorf, better known as Kate the Chemist, whose one-woman campaign to make science fun again has wiped away the impact of thousands of dreary text books. Maybe she can even rideshare with another UT lecturer, Emmy- and Tony Award-winning producer and current Professional-in-Residence at the University of Texas’ Moody College of Communication Mike Jackson, founder of production house Get Lifted Co.

Also, make sure to follow all our coverage at austinchronicle.com/sxsw. 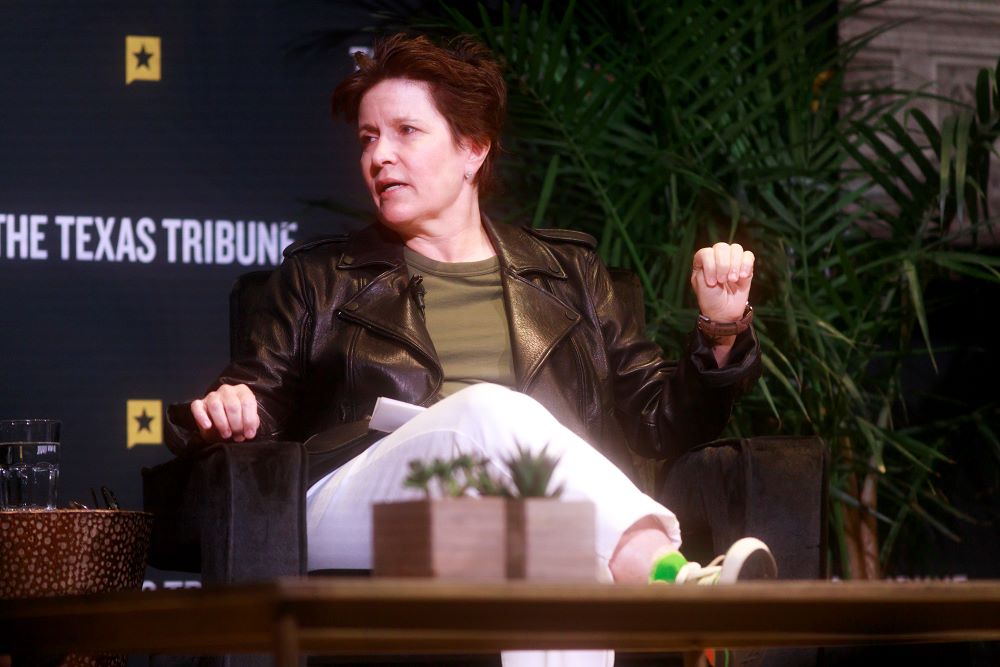 • Chemistry professor at the University of Texas at Austin Dr. Kate Biberdorf
• Founder of Royal and DJ Justin Blau, aka 3LAU
• Gonzo journalist and creator of Channel 5 Andrew Callaghan
• Professor at New York University’s Stern School of Business and author Dolly Chugh
• Director and screenwriter Julia Ducournau
• Professor at New York University’s Stern School of Business, New York Times bestselling author, and co-host of the Pivot podcast Scott Galloway in conversation with Editor-at-Large of New York Magazine, host of On with Kara Swisher, and co-host of the Pivot podcast Kara Swisher
• Emmy and Tony Award-winning producer, co-founder and Managing Partner of Get Lifted Film Co., and Fellow and Professional-in-Residence at the University of Texas’ Moody College of Communication Mike Jackson
• CEO of Luminate Rob Jonas
• Grammy Award-nominated singer, songwriter, and multi-instrumentalist Valerie June
• Founder and CEO of KORA Organics, entrepreneur, and supermodel Miranda Kerr
• Actor, director, writer, comedian, and musician Cheech Marin
• New York Times bestselling author of The Sum of Us: What Racism Costs Everyone and How We Can Prosper Together Heather McGhee
• Psychotherapist, New York Times bestselling author, and host of the podcasts Where Should We Begin? and How’s Work? Esther Perel
• Author and former Chairman, President, and CEO of IBM Ginni Rometty
• Founder and CEO of The Ocean Cleanup Boyan Slat
• Mycologist, entrepreneur, author, and inventor Paul Stamets
• Associate Professor of Environmental Politics at the University of California, Santa Barbara Leah Stokes
• Founder and CEO of Strangeworks whurley
• Co-founder and CEO of 23andMe Anne Wojcicki

• An Imminent Shift In The Plant Based Ecosystem: Consumers are finding themselves at a long-awaited intersection: diets are shifting to prioritize nutrition and environmental impact at a time when food innovation is booming and new brands hoping to address consumer’s fluctuating priorities emerge daily on grocery shelves. However, when food culture drives buying decisions in a sea of indistinguishable plant-based options, how do emerging products bust the paradigm of what people can expect from alt-meat? Where will consumer behavior go and how will the industry keep up? In this session, join founder of Momofuku and Majordomo Media, James Beard Award-winning chef, host of The Dave Chang Show and Recipe Club podcasts, and New York Times bestselling author David Chang, co-founder and CEO of Meati Foods Tyler Huggins, and co-founder, Chief Concept Officer of Sweetgreen Nicolas Jammet, and Head of Content at SutherlandGold and lecturer at the Wharton School of the University of Pennsylvania Aditi Roy as they discuss this shift and what the implications are for buyers and the food industry, ending with a hands-on activation where attendees will experience and taste mushroom root.

• Bijan Mustardson & the Future of NIL Partnerships: In 2022, creative agency CALLEN and Bijan Robinson launched the dijon mustard brand Bijan Mustardson, a partnership made possible by recent changes with NIL rules for college athletes. In this session, join founder and Chief Creative Officer of CALLEN Craig Allen, Marketing Manager at Athletes First Bryan Burney, running back for the Texas Longhorns Bijan Robinson, and Director of the School of Advertising and Public Relations, Moody College of Communication at the University of Texas at Austin Natalie Tindal, Ph.D., APR as they discuss how creative agencies can invest in more than a campaign and build a true business partnership for long-term success, developing a product and growing a brand with a celebrity business partner, and how to adapt to and anticipate where the NIL market is headed.

• Build the Damn Thing with Kathryn Finney: Founder and Managing Partner of Genius Guild and Wall Street Journal bestselling author Kathryn Finney’s book, Build the Damn Thing: How to Start a Successful Business if You're Not a Rich White Guy, is a hard-won, battle-tested guide for every entrepreneur who the establishment has left out. In this session, join Finney for a conversation where she will share her storied career as an entrepreneur, inclusion champion, and investor who funds Black founders and women entrepreneurs in pursuit of their entrepreneurial dreams.

• Building an Open Metaverse: As it stands today, a sole metaverse does not exist. What does exist are thousands of virtual worlds, many of which are connected through Ready Player Me’s network; an avatar system used by over 3,000 app and game developers. It is this interoperable network that has earned their reputation as a default avatar platform for the metaverse. In this session, join co-founder and CEO of Ready Player Me Timmu Tõke as he focuses on the importance of collaboration and building out partnerships in order to create an open metaverse and what brands need to do in order to make this happen.

• Building a Sustainable Economy in the Metaverse: As the metaverse is being created, it is our responsibility to build a sustainable foundation. But, how sustainable is the journey to this virtual landscape? In this session, join co-founder and CEO of VNTANA Ashley Crowder, founder and CEO of Emblematic Group and Director of Arizona State University’s Narrative and Emerging Media program Nonny de la Peña, and founder of Friends With Holograms Cortney Harding, as they discuss what the metaverse is today and explore how to build an inclusive environment, drive a shared value for businesses and creators, empower consumers, and enable ways to measure impact to create digital sustainability.

• The J Dilla Effect: Breaking Barriers Through Beats: James Yancey, aka “J Dilla,” is one of the greatest all-time hip-hop producers, a musical genius and visionary that inspired artists like A Tribe Called Quest, Pharrell Williams, Erykah Badu, and many others. Dilla made ultimate sacrifices to build opportunities for young, diverse creators to continue breaking down societal and cultural barriers. Curated by Save The Music, this session will feature founder and Chairman of the James Dewitt Yancey Foundation and J Dilla’s mother Ma Dukes and Grammy Award-winning DJ and music producer DJ Jazzy Jeff as they share personal stories of Dilla’s life and how his work changed hip-hop culture, while exploring how to carry on his legacy by investing in culturally rich communities to provide equitable resources for young creators to achieve economic stability and success through music and technology.

• Own Your Data: Empowering Our Digital Future: In this session, co-founder of the Own Your Data Foundation and author Brittany Kaiser will explain how she decided to become a whistleblower to protect our human rights in the digital space and discuss the issues that Big Tech has presented us with (lack of transparency, uninformed consent, no tracking or traceability, monetization of our data without any value going to us, etc), as well as the solutions she believes are essential to making technology more ethical and congruent with rights protection.

• Reigniting Fan Engagement at Live Events: The importance of community and human connection was more prevalent than ever when World Wrestling Entertainment (WWE) returned with its biggest event of the year, WrestleMania, in April 2021. This historic event featured the first Black female Superstars to main event WrestleMania, celebrity appearances, live music performances and the unveiling of WWE’s new signature, “Then. Now. Forever. Together.” to recognize and celebrate WWE fans, their community and the message of inclusivity. As WWE prepares to host WrestleMania 39 at SoFi Stadium in Los Angeles this coming April, Chief Content Officer of WWE Paul “Triple H” Levesque will discuss in this session the road to WrestleMania, the importance of the WWE Universe and how this community has evolved.

• To Trip or Not to Trip: The psychedelic science torch is getting passed to the next generation, with fresh perspectives on both ancient and future medicines. In this session, join Writer and Director of Hamilton's Pharmacopeia, chemist, and science journalist Hamilton Morris, professor of Pharmacology at Louisiana State University Health Sciences Center Charles Nichols, adjunct professor at the University of North Carolina, Chapel Hill and Professor Emeritus at the Purdue University College of Pharmacy David E. Nichols, co-founder and Partner at Palo Santo Tim Schlidt, and endowed professor of Psychiatry and Neuroscience of Trauma and Director of the Center for Psychedelic Psychotherapy and Trauma Research at the Icahn School of Medicine at Mount Sinai and Director of Mental Health at the James J. Peters Veterans Affairs Medical Center Rachel Yehuda as they explore the future of psychedelic science and answer questions such as, can we take the “trip” out of psychedelics, do we want to, and will “next gen” psychedelic compounds have an advantage over today’s medicines?