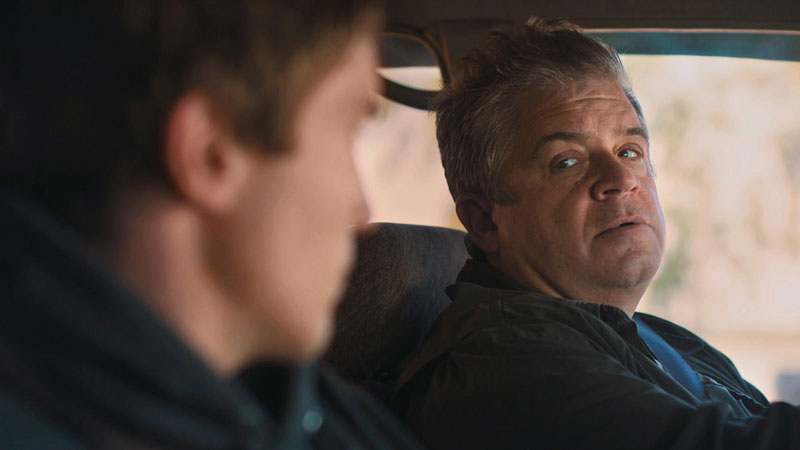 The premise of I Love My Dad is so icky that the film’s writer, director, and co-star James Morosini lets viewers know at the very outset that its plot is based on a true story, thus automatically rendering it more palatable.

Such knowledge won’t diminish this film’s cringe factor, but it might at least thwart accusations that the story is gross and preposterous. Plus, cringiness seems to be one of the things we desire in our popular entertainment these days.

In one of the film’s opening scenes, we witness Franklin (Morosini himself) in a final group session before leaving the in-patient treatment facility where he’s been staying as the result of a suicide attempt. He announces to the group that his latest bit of progress has been to block his dad from accessing all his social media accounts. A tape loop of voicemail messages from his dad Chuck (Patton Oswalt) has already played over the film’s opening credits. They are full of excuses, broken promises, and and rationalizations explaining why Chuck hasn’t been there for his son’s important moments and scheduled visits. Presumably, this unreliability also explains why he’s no longer married and living with his wife (Amy Landecker) and son.

Upset that he can no longer keep up with his son by lurking on his socials, Chuck lands on a questionable plan: He will create an online profile with pictures of a nice waitress named Becca (Claudia Sulewski) who works at his local diner and catfish his own son. His own suicidal son. What follows are lessons in bad parenting since there are no good ways for this ploy to end.

All that’s missing in this SXSW Grand Jury Award-winner is a giant catfish fry.

Don't miss our interview with writer/director James Morisini, "And You Thought Your Love Life was Tough," March 11.