Whipsmart horror is more than its Gen-Z Clue setup 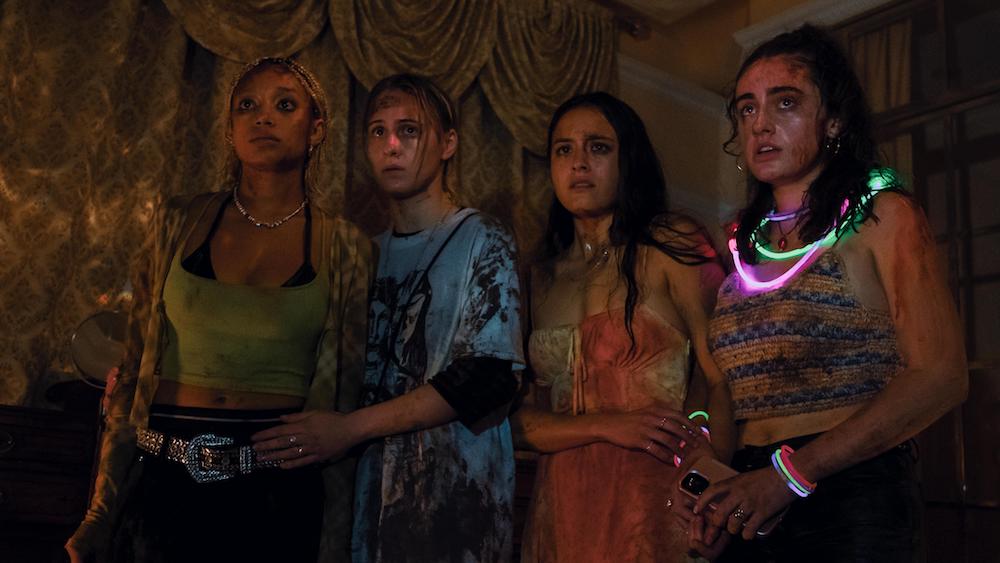 Trapped in a giant mansion during a hurricane, a group of girls and their significant others all decide to play an intensely spooky game in the same vein as Mafia (the titular “Bodies Bodies Bodies”), which leads to heightened suspicion and a lot of pointing fingers when one of the crew is found dead outside. Bodies Bodies Bodies is a quippy, electric fun house of a film, and a firm case that beloved boutique distributor A24 is truly buying into the brand of Gen Z’s hyper-aware, sleazy, glitter-punched aesthetic.

The cast for the film is unreal, starring a slew of trendy up in coming young women who are all on the verge of being the most sought-after talent in Hollywood. Borat Subsequent Moviefilm star and Oscar-nominated actress Maria Bakalova leads the film as Bee, fresh in love with Sophie (Amandla Stenberg, The Hunger Games’ Rue). Bakalova is next-level in the film as a mousy, shy girl who just wants to impress her new girlfriend’s oldest friends. She stutters, and nervously laughs her way into the group’s hesitant welcoming of her, a brilliant showcase that her previous awards buzz wasn’t a fluke – Bakalova is a chameleon on screen. Chase Sui Wonders plays the self-involved, dramatic Emma who can cry on a whim to earn sympathy, a funny performance that is reminiscent of her work on the underappreciated TV show Genera+ion.

Perhaps the biggest standout, though, is Shiva Baby’s Rachel Sennott, who is just as sharp and witty as she was in her breakout film. Sennott has the energy of a Seth Rogen comedy, a boisterous quality that elevates one-liners, and the physicality of her performance makes her the star of almost every scene. Bodies Bodies Bodies is a film that relies on the chemistry of all its actors, to bounce jokes off of, scream in unison with when things get intense, and to cultivate suspicion.

The slow unraveling of trust throughout Bodies Bodies Bodies feeds into the movie’s tension, revealing the rust and decay of this particular group of close-knit female friends. They trauma-dump on each other through tears and blood, clawing away at the cracks that have formed in their bonds over the years. Buried texts, cruel jabs told in confidence, and toxic emotions all bubble up until they boil over. The dramatic chaos feeds into the film’s energy, and heightens the stakes of the mystery.

And while it’s all fun and games until someone gets stabbed in the neck with a rusty antique sword, the film’s pressure gauge of tension starts to dwindle towards the end. Character motivations are revealed through hoarse screams, scrambles for weapons are a little too visually haywire, and confessions hit harder in the beginning than they do towards the end. Bodies Bodies Bodies slightly fizzles out like a party game that’s gone on too long, but fortunately it doesn’t sputter out too much. A fun, inverted single location thrill ride, director Halina Reijn creates one rainbow swirl of a good time.