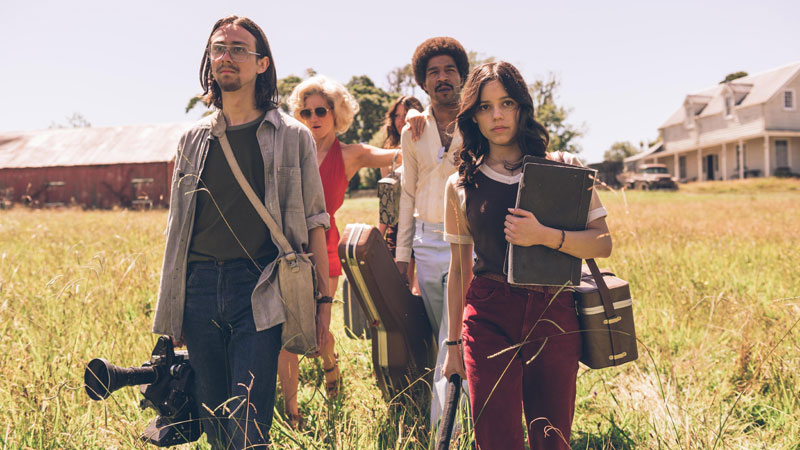 It’s been a while since Ti West – the horror auteur whose indie features created flurries of buzz across the festival circuit, from his cozy hotel ghost story The Innkeepers to the demonic slasher The House of the Devil - has made a movie.

West is incredibly skilled with homage, he always seems to understand the texture of subgenres and time periods his films are embracing. X is no different. Set in the sweltering humidity of Texas in 1979, X is an ode to the quick and dirty method of shooting smut and horror in the prime era where low budget filmmaking was king.

With a Texas Chain Saw Massacre-style crew, X opens with a bunch of young, hot adults make their way to a secluded farm out in the middle of Texas where they hope to film the artsiest porno the world has ever seen. Their film relies on Maxine (Goth), the woman with the “X factor” that’s going to take their project to the next level, because she’s a shooting star, somebody destined for greatness beyond the banal swampland of Houston. Strutting around the farm in overalls with no shirt, Goth’s presence is a magnet in X, with shimmering blue eyeshadow fit for producer Sam Levinson’s Euphoria, she commands the screen, as seductive and ethereal as ever.

West has always been a cultivator of exciting talent, and the addition of Scream queen Jenna Ortega as the hesitant, sheltered film director’s girlfriend and assistant, Lorraine, creates a friction that’s palpitating, a simmering anticipation as her eyes grow wider and wider as the shooting day progresses. Ortega’s hesitancy is a foil to Goth’s sexual power and Brittany Snow’s bubbling mother hen figure, Bobby-Lynne. With the addition of the smooth sailing Kid Cudi, the Matthew McConaughey double Martin Henderson, and rat-like film bro Owen Campbell, the cast of X gives West’s slow burn a humming rhythm that never ceases to captivate.

A24 has branded themselves as the curators of elevated horror, with films like Midsommar and The Witch, but what X finally brings them is a film that’s a blast of a ride, with blood and guts gushing, gator teeth chomping, and body-hurling gun shots. The splendor of gore is intoxicating, a welcome change of pace from the self-serious horror movies that populate the zeitgeist. Cinematographer Eliot Rockett’s camera slowly inches through the film, creating tension and thrills that have long been amiss in horror romps. A stunning shot of Maxine swimming in a murky brown man-made lake as an alligator inching towards her feels plucked out of southern creature feature, with Maxine’s pale, soft skin shimmering in the sunlight, oblivious to the danger that lurks nearby.

The threat doesn’t just come from swamplandia, but also from the creeping elderly couple lending out their ranch to the film crew. X’s battle between youth and aging is twisted, a sickening vampiric display of the dangers of lusting over lost sexual power. The dichotomy of Maxine’s climax with the older woman, Pearl, brushing her bristled hair is enchantingly haunting. While the film crew looks in awe upon Maxine, dead-eyed dolls gaze at Pearl, a de Palma inspired split screen technique that is effortlessly pulled off. X’s exploration of the chase for youth is a riot, a cheeky splatterfest that blends nostalgia and while also showcasing his unique talent for taking cherished horror film tropes and techniques and giving them a modern, streamline spin.

The expectations for West’s return to film were high, and luckily X brings this master of horror back with a bang.