Bullock and Tatum bring back slapstick 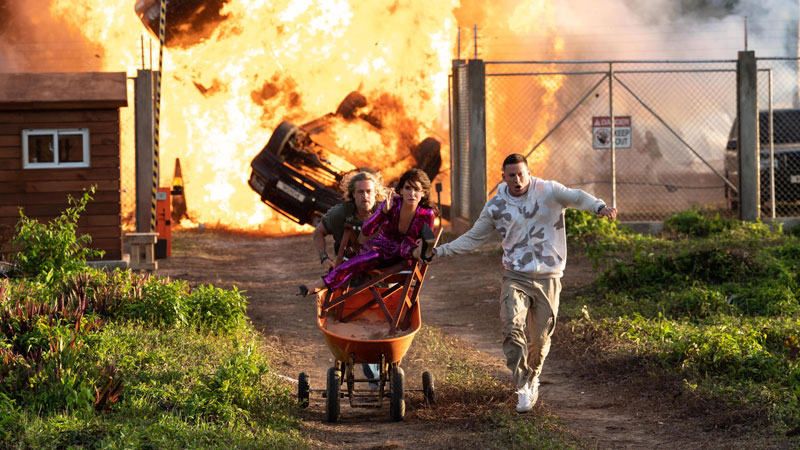 Hold the phone, what?! I was snobby and thought “No way!”. All these years later, though, Bullock has since perfected her schtick and it’s on full display in The Lost City.

Loretta Sage (Bullock) has a best-selling romance novel series with a deadline for the next book looming. She’s grieving the loss of her spouse and hasn’t left her house in years. Forced to go on a book tour shared with the popular cover book model of her books, Alan Caprison (Tatum), Sage is kidnapped by Kendall Roy. Er, by Abigail Fairfax (Radcliffe), a billionaire crybaby adventurer who is looking for the Lost City of D, which is, of course, the title/subject of Sage’s latest book. Caprison, who imagines himself the character from the book series, Dash McMahon, hires Jack Trainer (Pitt) to find her and together they set off to somewhere in the Atlantic to get her back.

Now, they’ll be hundreds of reviews comparing this to films like King Solomon’s Mines and Romancing the Stone - and they’d be right. It is exactly that. Why tamper with the formula when it works? And The Lost City does works. It’s a fun two-hour romp that’s not trying to be anything else but what it is; a good old-fashioned action-adventure romantic comedy.

Bullock might bungle her way through the jungle (that’s all right by me) but it’s Tatum who steals the show. Like Bullock, he knows what he’s great at and does it well. His Alan/Dale is charming and well, you get to see nearly all of that charm on display here. Radcliffe looks like he was having an absolute blast. Pitt is Pitt but it’s limited Pitt so viewers should enjoy him while you can.

Much like a lot of fare coming out recently, The Lost City is a film you can escape your troubles with for a couple of hours. Award-winning? Nope, but it is fun (and funny!) and, if nothing else, there’s always the lure of Channing Tatum’s ass to get you to buy a ticket.