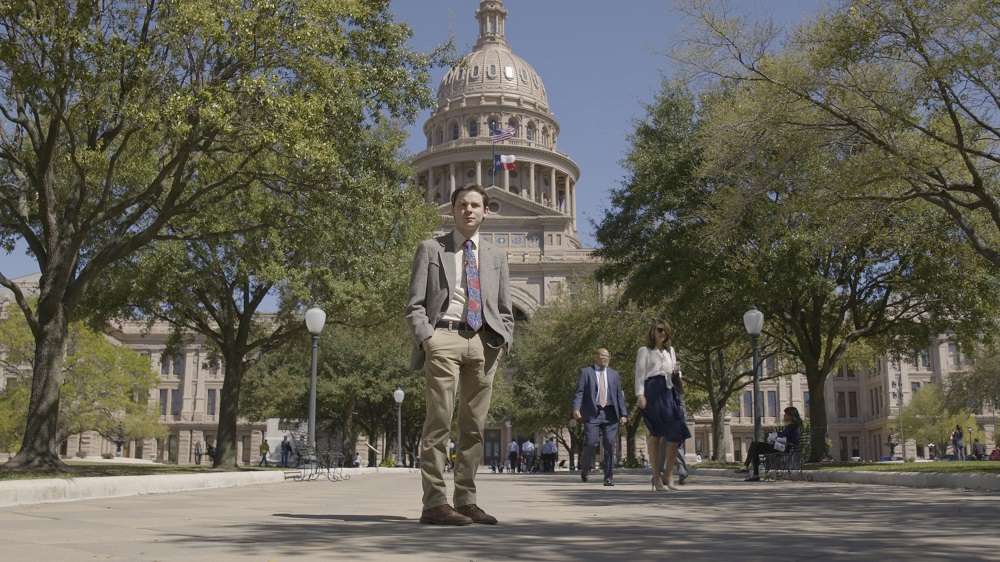 In 2018, 24-year-old Hayden Pedigo released a bizarre 58-second video announcing his candidacy for Amarillo city council. At the time, Pedigo had no intention of launching an actual political career; the video was meant to be a Harmony Korine-esque exercise with an amateur filmmaker friend.

But when the video goes viral — at least within his community — the resulting attention inspires him to make a real run at upending the status quo.

So begins Kid Candidate, the new documentary from director Jasmine Stodel. One of the first things we learn about Hayden Pedigo is that he is a “well-meaning dupe.” These are the words of Jeff Blackburn, one-time founder of the Innocence Project of Texas and Pedigo’s volunteer campaign advisor. Even though Blackburn believes the young man’s campaign is entirely genuine, the attorney spends most of the movie criticizing him for his lack of a clear political ideology. For Pedigo, the most prominent voices of dissent come from within his campaign.

This makes it clear from the onset that Kid Candidate is not some Knock Down the House-esque political Cinderella story. Instead, Jasmine Stodel uses Pedigo as an excuse to pull back the curtain on Amarillo, exploring the decades of gentrification and income inequality that lead so many in the city to suffer. Stodel splits her time between the candidate and the neighborhoods directly impacted by the flow of money in the Texas panhandle, interviewing leaders in the Black and South Sudanese communities. And the more Pedigo learns, the more he feels the weight of the election on his shoulders.

While the campaign may be rooted in social media success, Stodel also uses Kid Candidate to gently remind us that social media activism does not equate to political organizing. In one scene, Pedigo’s confidence about an upcoming campaign event’s success is shattered when only a handful of people turn out. “He really believes that Facebook is reality,” Blackburn says with a sigh.

This is the beating heart of Kid Candidate. There is no substitute for venturing out into your community and doing the work, no matter the outcome. In the world of local politics, even a failed campaign can shift the conversation. Win or lose, the film makes it clear that Pedigo has changed the conversation among his friends and neighbors. It’s nowhere near enough, but it might be a good start.