Doug Benson and friends give South By a fond, filmic farewell

Some things end with a bang. Some end with a whimper. But what if there was a better, middle way? 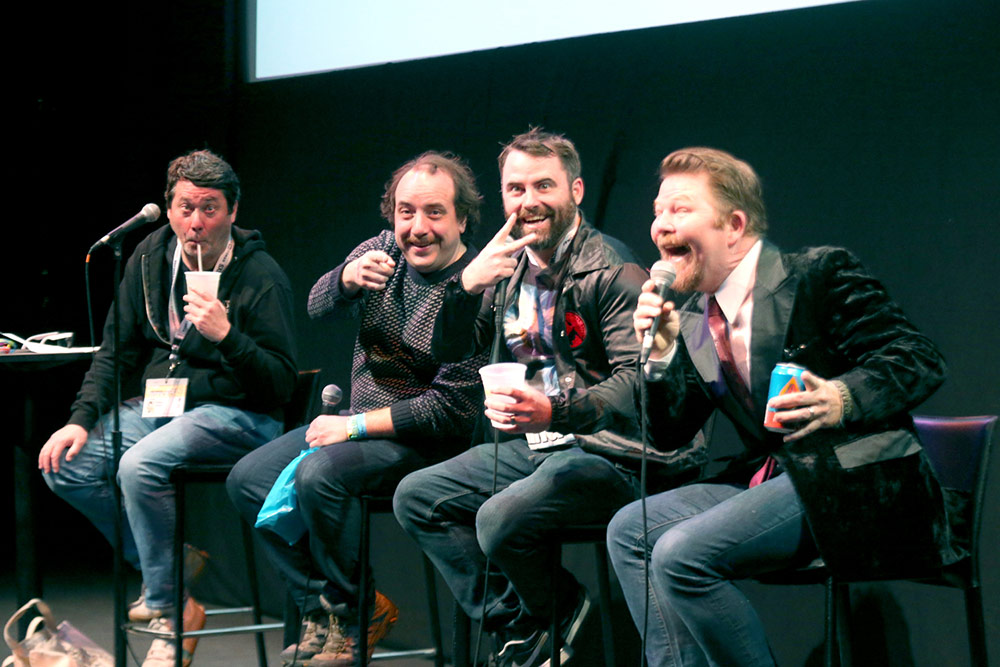 Saturday’s recording of comedian Doug Benson’s podcast Doug Loves Movies, the second of this year’s SXSW, was a festival ending full of the easy joy of a couple of friends joking over Lone Stars and a campfire. The first iteration may have had its advantages – some fan favorite guests (Kumail Nanjiani and Leonard Maltin, among others), a slightly cozier venue (Esther’s Follies), and a start time marginally closer to Benson’s favorite part of the afternoon (4:20pm) – but the second’s relaxed charm, a cast that included hometown heroes, and audience of diehard fans harkened to an earlier, simpler South By and had everything to recommend it.

While outside the Stateside, it was difficult to distinguish the Doug devotees from the badgeholders waiting anxiously to see Pet Sematary at the Paramount (a few of the latter very unhappily discovered they were in the wrong line after some 20 minutes of waiting), once inside, it took about two seconds for the crowd to establish itself as a crew of true believers who cheerily clapped along to the show’s theme song and gave a rousing rendition of the opening call and response:
“Hey hey hey, everybody! My name is Doug, and I love movies –”
“AND THIS IS DOUG LOVES MOVIES!”

Benson opened by surveying the assortment of “nametags” fans had brought to the show – part of a tradition of altering movie posters to include the owner’s name, e.g., HerediTERRY, Army of DarkNESSA. For a first-time attendee, there was something special to seeing these items, until now only known from the host’s audio descriptions, live and in-person. (If you, like me, have wondered how big they tend to be, the answer is anywhere between standard computer print-out to school-project poster.) Sunday’s two non-poster outliers were, by turns, topical and touching: Another Terry had a paperback of Pet Sematary, which prompted Benson to ask if they were trying to make him feel worse about missing the premiere next door, and a woman named Katie had a baseball emblazoned with favorite phrases of comedian Brody Stevens, a friend of Benson’s who passed away in February of this year.

After sharing a tale about walking down the alley behind the Alamo Drafthouse Ritz (“If you love the smell of pee, check it out sometime!”), Benson was joined by his panel: Austin-based author and filmmaker Owen Egerton, musician Sean Tillmann (aka Har Mar Superstar/half of Heart Bones), and comedian and Funniest Person in Austin winner Doug Mellard. Their moods ranged from impish to “The Dude abides,” but they found an easy camaraderie that made for lively but not overly competitive gameplay.

The lineup of every episode of Doug Loves Movies is a little different, but the structure is set in stone: The panelists contribute items to a prize bag for one lucky audience member, share what movie they’ve seen most recently, each pick an audience member with a nametag who they will be playing for, and then play some of the many custom movie-trivia games that are part of the show’s lore. The prize bag’s standout item this episode was Egerton’s contribution: the costume he’d handmade for the Master Pancake mock of Leprechaun: Origins the day before. Benson skillfully peer-pressured Egerton into going out into the lobby and coming back in the ensemble, which turned out to be an inside-out rubber cow mask and two skeleton arms (all painted grey-green) a huge black trash bag, and huge feet, presumably from a Yeti costume. It was absolutely deranged in the best way possible, though wearing it up and down the aisle of the Stateside almost took Egerton out of commission – once he returned to the stage, he admitted that he’d forgotten to cut air or eye holes in the plastic bag and had to take a second to catch his breath.

Cue Benson’s impression of Bane: “Let the games begin.” First up was Jason and Deb’s IMDB game (Benson, re: the website: “The initials stand for ‘I am Doug Benson!”), where the contestants were given film titles from an actor’s “Known For” section. While that might seem straightforward enough, IMDB’s sometimes baffling algorithm complicates things – Dakota Johnson, who was one of the answers, has The Social Network as one of her “Known For” credits, but not Suspiria. After Tillmann confidently won three rounds of the game, Benson moved to even trickier fare: “Goo Goo or Gaga?”, where contestants were given a title and had to guess whether the movie in question has a song by the Goo Goo Dolls, Lady Gaga, or neither in its soundtrack. In a truly brutal fake-out move, the first five films named were “neither”s, but there was much delight in the Charlie Brown-and-the-football-ness of it all, and in the vindication of the last two (Love, Simon and Freddy’s Dead: The Final Nightmare, which were Gaga and Goo Goo, respectively).

Last but certainly not least was that old standby “Last Man Stanton,” where an audience member gives the name of a prolific actor or director and the panel goes around in a circle naming their films. When you can’t think of one or you get one wrong, you’re out. The key? Total accuracy with phrasing. Sunday’s subject was Billy Crystal, and the panel was only able to get to nine names before everyone was eliminated, largely due to the scourge of City Slickers II. The second half of the title proved elusive – The Search for Curly’s Gold? The Hunt …? – and it wasn’t until Tillmann as the lone survivor (and winner of the episode as a whole) that Benson checked and found that the word everyone had been looking for was “legend.” The audience member Tillmann had played for got the dubious pleasure of putting on the cow mask (now aggressively shedding paint), as well as a prize bag that included shirts, a Taco Bell gift card, merch from Austin band Riverboat Gamblers, and a book on e-dating that Benson had been given while on a cruise. A treasure chest, to be sure, and, I daresay, the most exclusive swag bag SXSW has ever seen.