One of the true joys of Austin’s March Madness is the chance to see some of the hundreds of international artists that travel to SXSW each year for a rare U.S. date. Flamingo Cantina’s Thursday night bill featured some of the best of that globe-spanning bunch in a lineup that flared wildly diverse – sonically, geographically, and otherwise. 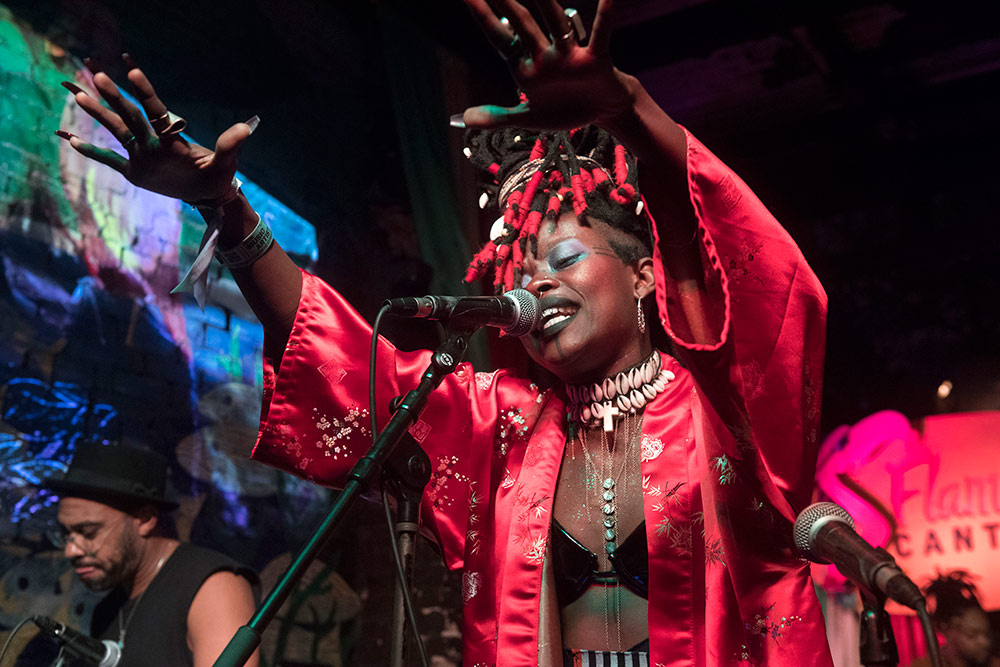 Shrouded in a red kimono, with red-tipped locks wrapped high upon her head like a magnificent crown, Brooklyn-based Ghanaian artist Jojo Abot instructed the crowd to “expect nothing and be open to all of it.” A bundle of sage burning at her feet, “black girl magic” seems wholly insufficient to describe the beauty of Abot’s art, a multimedia, multilingual, and multisensory experience.

Accompanied by two Brazilian percussionists she met earlier in the week and banging on a pair of drums herself, Abot rapped and sang and chanted over scattering beats blending experimental jazz, Afrobeat, house, and soul.

Borrowing bits and beats from across the African and Latin diaspora, ninepiece Brazilian Afrobeat orchestra Bixiga 70 hit the stage like a tsunami, unleashing a furious and frenetic wall of sound. The band takes its name from the Bixiga neighborhood of their native São Paulo, while also nodding to Fela Kuti’s pioneering band, Africa 70.

There’s no shortage of Fela tribute bands around the globe, but perhaps none play with the sheer power of Bixiga 70, a fact best illustrated by a trombone solo so aggressive that anyone near the front of the stage should feel fortunate to have escaped without a black eye.

The joyful chaos continued behind a quintet hailing from the Congolese capital of Kinshasa, Kokoko!, who marched to the stage chanting “ko-ko-ko!” through a megaphone. While the spectacle of five dudes in bright yellow jumpsuits remains eye-catching, it’s the band’s entirely recycled instrumentation (save for a laptop) that inspired wonder.

They clanged pots and pans and thumped empty detergent bottles as rhythms were scratched from a guitarlike instrument fashioned, in part, from tin cans. The wild, call-and-response rumpus represented a brilliant form of ghetto science. Necessity, as they say, is the mother(land) of invention.