“This one’s called ‘Go Fuck Yourself,’” grinned Amy Taylor, spitfire vocalist for Australian boogie punks Amyl & the Sniffers, two thirds of the way into their Thursday night showcase. “No one else will.” 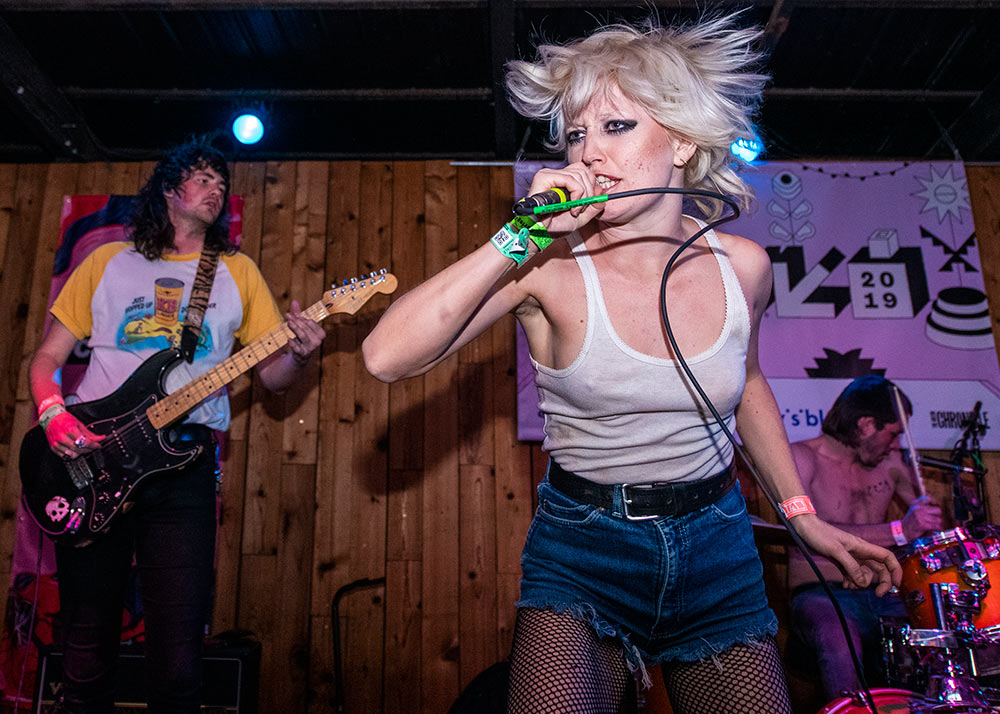 The Melbourne crew rode in on a buzz broad enough to carry 15 bands as they strutted onto the Barracuda Backyard stage. They’re striking enough, visually. Guitarist Dec Martens could’ve been in any number of Seventies revivalists with his mousey shag.

Meanwhile, drummer Bryce Wilson and bassist Gus Romer channeled that same decade’s Australian version of skinheads with their combination No. 2 crop/mullets. Taylor suggested a Down Under Cherie Currie in her blond, Ziggy Stardust shag, white tank-top, and Daisy Dukes. The music engaged equally.

Equal parts AC/DC and Ramones, it’s the exact chainsaw, hydromatic riffage that distinguished Rose Tattoo in its prime. Martens manhandles his Strat like a Greg Ginn/Malcolm Young mutation, while Wilson and Romer batter the rhythms like a methed-out Cliff Williams and Phil Rudd. Taylor’s bratty worldview ups the trash factor by 1,000.

She’s all over the stage, mounting amps, monitors, drums, and the P.A. mains. Gutter anthems like “Cup of Destiny,” “Some Mutts (Can't Be Muzzled),” and new single “Monsoon Rock” drive her into a manic frug, shaking constantly, flurrying a boxing pantomime, and busting catwalk moves. A broad grin divided her face the whole time, even as she ended the show hanging upside down, legs wrapped around a beam in front of the stage.