No stage necessary. Beerland’s rowdy patio shows remain a renegade highlight of South by Southwest. Heavy heroes like Fucked Up, Oh Sees, and Trash Talk are all veterans of the gig, in which bands play the club’s front porch to an audience collected on the surrounding sidewalk, alley, and street. 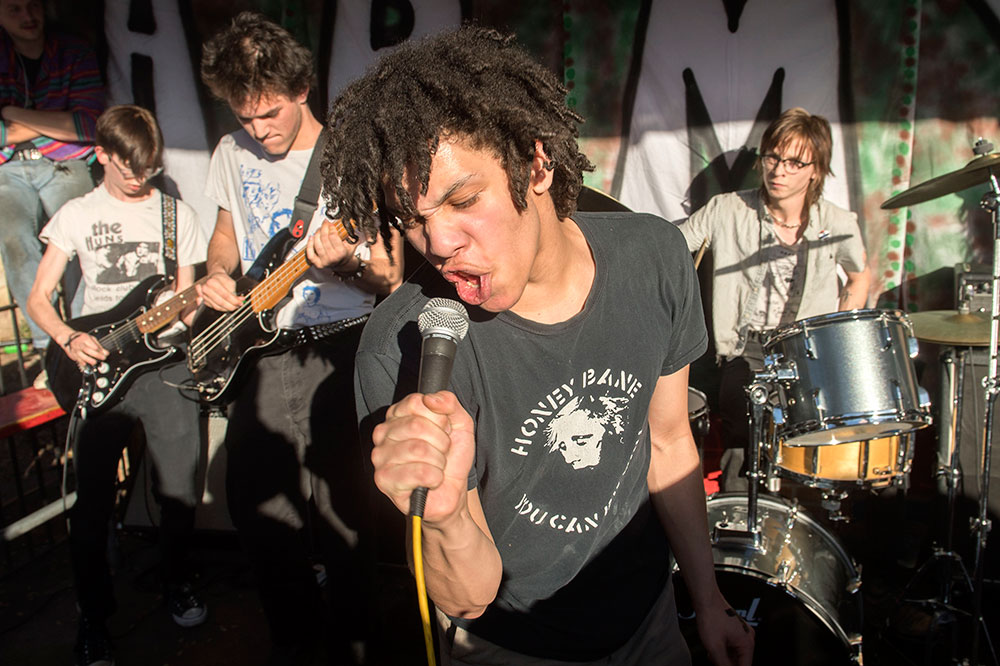 Opening Army’s set on Wednesday afternoon, Ben Redman’s primal cymbal hits had a Pied Piper effect. The crowd doubled with Red River passersby gravitating to the slamming hardcore punk generated by the young Austin quintet. Army’s songs, thriving on Redman’s drum battery and an urgent flurry of barre-chords from guitarists David Ziolkowski and Max Redman, all clock in under one minute.

A sidewalk pit broke out on their third siege, but by then everyone recognized something was wrong: no one could hear Alex Thomason’s vocals. The P.A., a single speaker plugged into a small power amp and mixer, had committed suicide.

Beerland’s best audio minds – Exhalants frontman Steve Pike and sound engineer Max Deems – went to work franticly exchanging cables and testing components while the band dicked around like you do in your practice space while waiting for the singer to show up. Max Redman squalled feedback from his amp, Ben Redman tweaked his hi-hat clutch, the band even launched into a fuck-around jam on Pink Floyd’s “Money.” This went on for 10 minutes to varying degrees of awkwardness.

Soon, the soundmen pulled a coup de grâce, pulling out a guitar amp and plugging in the vocal line directly. Despite the glitch, no one had left. They’d merely been storing energy, which exploded when Army launched back into their pummeling set.

Fans hung on the rail, others slammed into each other as Thomason screamed, “Fuck you! Fuck you! I really hate youuuuuuu,” grimacing with every word as if they lyrics were stabbing him. Two cops walked by and didn’t do shit. The afternoon sun had begun to set.

Two young women fought in the street, one hollering, “You’re trash! You’re trash!” as a friend dragged her away. For 40 minutes during SXSW, Austin’s prime music strip exuded the unpredictable DIY lawlessness that makes you feel alive.