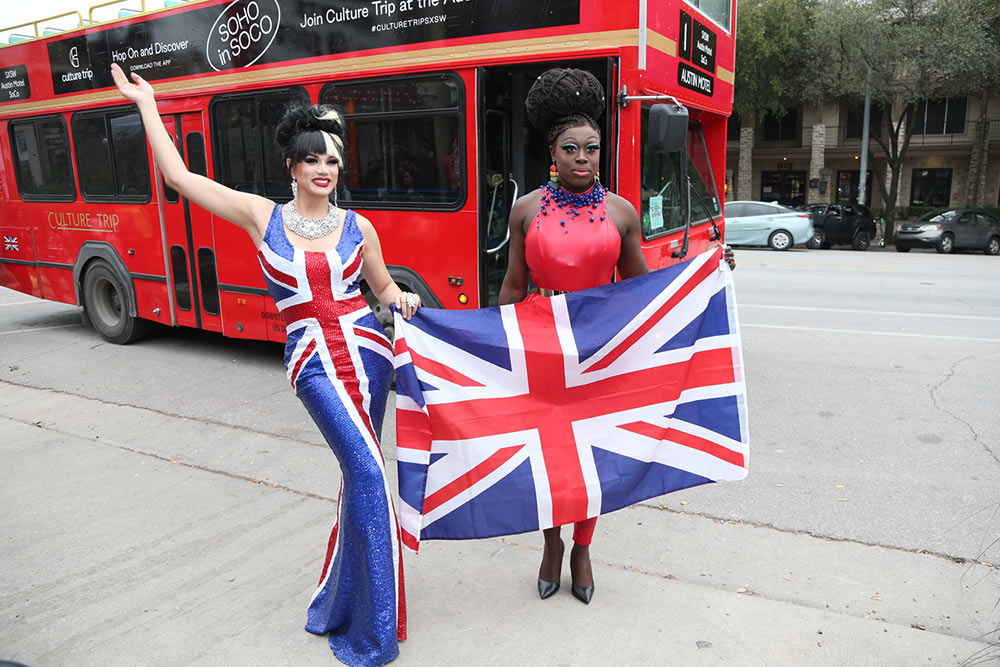 In a nod to the evening’s host – Culture Trip, a start-up that provides travel recommendations from locals via web and app – and the house’s theme – Soho – the queens rolled up in a red double-decker bus and posed beside it with a British flag, to the cheers of the fans who’d waited eagerly for them on the South Congress pavement.

Their Brexiting-the-bus ensembles (a bedazzled Union Jack dress for Manila and a red capri-length jumpsuit for Bob) were the first of many costume changes over the course of the evening. Once the the hosts entered, the first 180 people in line (an even split of badge-holders and assembled proletariat) were allowed into the tented motel courtyard, where outdoor couches and chairs had been lined up in rows in front of a small stage at the southern end. Seating being limited, most of the crowd ended up standing on the sides, which made Bob and Manila’s performances – which more than once had them snaking their way through packed aisles – all the more impressive.

Though billed as drag bingo, the event was (delightfully!) much more about lip syncs. Manila opened with appropriately glamorous lip sync of the Braids’ “Bohemian Rhapsody” in a dreamy, tan gown and sparkling jewels. Bob followed with an awe-inspiringly precise and expressive rendition of Ella Fitzgerald’s “Air Mail Special,” which is about 90% scatting. When the crowd erupted in applause at the conclusion, she quipped, “I deserve that.”

It was about that time that it became clear that the crowd included a handful of drunk attendees who considered this an interactive experience. Manila and Bob smoothly made lemonade out of those particular lemons, giving the disrupters nicknames (“Adele from London” per one’s accent and “Chipotle” per the other’s silver dress) and firing off cutting but not cruel jokes about their inebriation to huge laughs. After a second lip sync from Manila (“I’m Every Woman,” Whitney Houston) in a green velvet dress with dragon embroidery, Bob joined her onstage in a matching black dress and the advertised bingo began. With the night getting late, they limited it to two fairly short games, which left a bunch of extra prizes to distribute. Cannily, Bob and Manila put the second and final winner, a very sweet and excited UT student named Connor, to work bestowing the assorted rainbow fanny packs, crowns, and other plastic ephemera on the appropriate people (Manila suggested a toy fishing rod go to someone who enjoyed fishing – “So maybe a lesbian?” – and Bob gleefully commanded that a poster of Lana Del Rey be given to a power bottom).

With the crowd firmly in the palm of their hands, they closed by selecting two civilians to participate in a "Lip Sync for Your Life," a Drag Race-originated competition wherein the bottom two queens lip sync to the same song to see who will avoid being eliminated. The song here was “Vogue,” and both contestants earned audience adoration, with the female lip-syncer (immediately nicknamed “Lady Trinity”) getting laughs with prop work that included throwing bingo balls into the crowd and the male lip-syncer (who, Bob noted, bore more than a passing resemblance to Corbin Bleu) wowing with actual voguing.

Naturally, it ended with a tie.

Drag Bingo with Bob the Drag Queen and Manila Luzon