Danish environmental artist Jakob Kudsk Steensen “believes he and other ecologically-minded artists can one day bring long-lost species like the small Kaua'i 'ō'ō back from the dead, using a combination of technology, digital archiving tools, and a whole lot of artistic imagination,” reported Engadget back in May of last year. 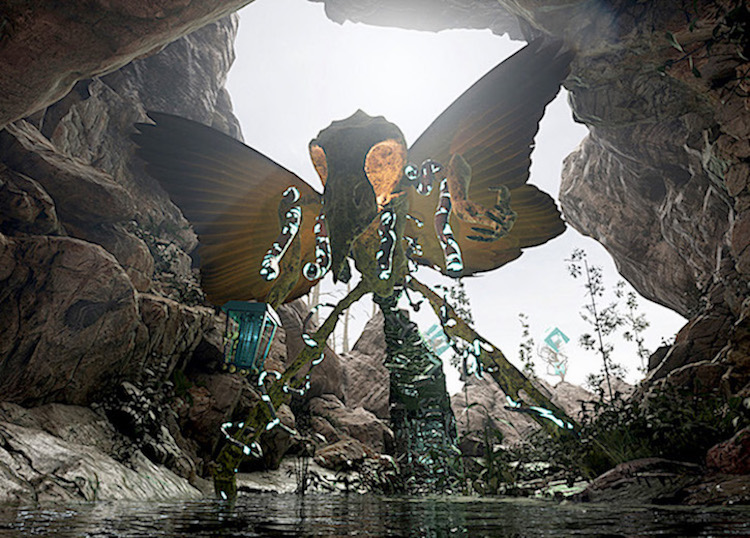 Don’t get me started on the basic temerity there, bro, as if any species of animal or plant or, or, or slime mold (I’m looking at you, Lord Running Clam) exists only inasmuch as its existence is perceived by some human. Like, if a tree falls in a forest and there’s no one around to hear it, the goddam forest itself doesn’t really exist?

On the one hand, I can't even.

On the other hand – holy screaming Gaia, is this VR work of Steensen’s astonishingly gorgeous, or what?

Never mind the bringing-back-the-species bullshit, using the demise of the Kaua'i 'ō'ō (and the recording of its never-returned final mating call) as inspiration for a haunting journey through a Hawaiian stream and forest and sky that’s two-thirds uncanny-valley realism and one-third immersive and constantly morphing abstract art … well, it’s a self-justifying work, if only because it’s done so well. There are many VR experiences out there where a visitor has no agency but perception, scenarios in which you can’t affect the environment at all, but that environment is all around you and moving through you as you drift along like a ghost in the machine; and this is my favorite one so far.

Creating a fully immersive, seemingly alive replica of a swampy forest that’s as detailed as the one in Re-Animated: that’s the first portion of this divine experiential trinity. It’s “a distorted digital reconstruction of the Kaua’i ʻōʻō’s original habitat, on the Hawaiian island of Kaua’i,” Steensen’s professional website explains, and it’s a delightful and secluded little paradise.

The “distorted” bits are the second portion of what I’m positing as a trinity: Odd sculptural abstractions in vivid and sometimes shifting colors, often complementing the surrounding organic shapes, floating through the island’s swampy forest, phasing through the crowded trees and the vines and the rocks and the flowing river and the swimming fish below and the buzzing dragonflies above and through one’s virtual self.

And the third part is the interaction of the first two parts – or at least how those two do a sweet con job on your sensorium’s comparative framework. I mean, the forest, the river, no idiot would mistake the surroundings for reality – it’s simply a lovely and impressively complex artistic mock-up. But then you have these obvious constructs floating about, too, these distorted and sculptural ghost-shapes, and, besides being enjoyable themselves, they serve to make the “natural” environment more realistic by contrast. Which in turn heightens the intentional beauty of those obviously devised constructs. Which in turn – it’s a progressive feedback loop, see? And just when that progress is reaching what must be its peak in your mind, you notice that the “natural” constructs and the “devised” constructs are beginning to become indistinguishable – the shifting design on that one tubular length of artwork, no, that's actually the shimmering of lichens on a suddenly undulating log – as the whole enviroscape morphs and dissassembles around you in, like, coruscating patterns … and then you’re floating upward through the canopy and into the cloud cover and beyond.

Coming out of this wondrous creation, I felt that it seemed even more magical than … it should have? As if I lacked conscious recognition of something that had affected me on a subliminal level? A little research confirmed that. Because, as Steensen’s website says, Re-Animated “includes algorithmic music composed by Michael Riesman, as well as environmental audio effects that connect to the digital landscape. Plants, moss, and insects respond to the pulse of music generated in real-time, and the audience’s breath and voice organically impact the virtual atmosphere through a microphone in the VR headset.”

Not to be silly about it, but that’s like, if you fall in that virtual forest, the forest itself is going to hear you make a sound.

Note: The most salient sound I’m making in response to Jakob Kudsk Steensen's Re-Animated is a whispered “fuuuuuuuuuuck” at the strange immersive beauty of it all.