A race to the bottom in different flavors of toxic masculinity

Define "just." In the latest sleazy delve into the terribleness of human beings, director Adam Mason is definitely fucking with us, and he's not letting us – or his cast of lowlifes – off any hooks. 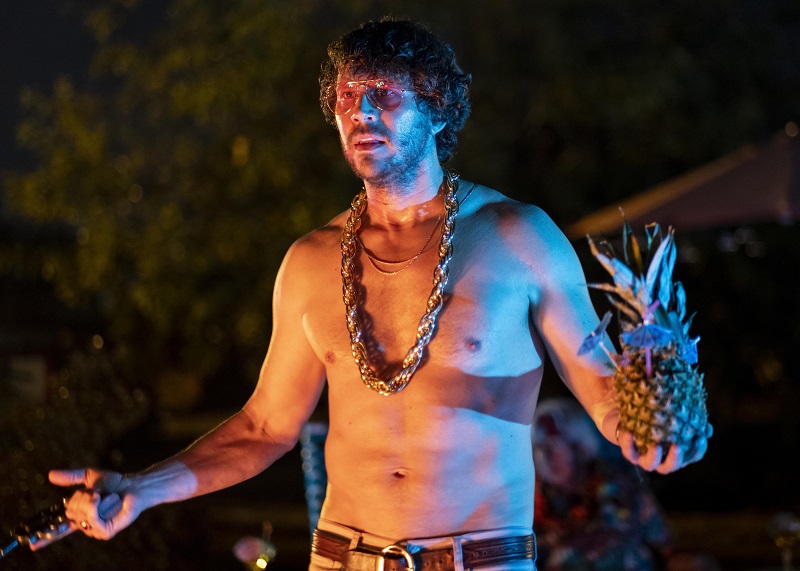 In this seventh entry into the Blumhouse/Hulu holiday-themed anthology series Into the Dark, Mason has been given the right to yell "April Fool's" (coming in June, he'll be taking a much more conventional approach to horror with his Father's Day episode, They Come Knocking). With I'm Just Fucking With You (and it is Fucking, per Mason, no matter what anyone says about F*cking), he's hiding whoopee cushions and letting off stink bombs, left, right and center.

Meet Larry (Keir O'Donnell), a meek and nebbish guy being forced to go to a wedding in L.A. that he really doesn't want to attend. But don't feel too sorry. Online, Larry is a POS troll, cyberstalking his ex, posting one-star reviews – he's probably review-bombing Captain Marvel as we speak. Yet he's a keyboard bully, incapable of dealing with real-life antagonism. That's unfortunate, because when he books into a shithole motel to wait for his sister (Jessica McNamee), that's when he meets the overly gregarious, intrusive, no-personal-space manager Chester (Hayes MacArthur, a grinning, wide-eyed, dilated-pupil maniac), who keeps needling and wheedling him, then slapping him on the back and telling him, "I'm just fucking with you." Like that's enough to make amends with the humorless Larry.

Just having Chester mess with Larry would be enough, like if Serial Mom-era John Waters had remade Planes, Trains & Automobiles. But Mason never saw a zig he wouldn't zag, and if you think the revelation is that there's more to Chester than you'd expect – well, yes, but exactly what he's up to is more deceitful and devious than expected, and it's a patented Mason-style psychotropic indictment of multiple flavors of toxic masculinity and selfish douchebaggery.

After two decades of slogging in the indie horror trenches (often to his own frustration, resulting in 2007 in him creatively vomiting up the extreme nerve-grinder Pig which he unleashed for a rare screening at SXSW 2017). Between Blumhouse handing him the keys to their signature TV franchise, and his upcoming movie for grunge's metal overlords turned rock institution Alice in Chains, Mason is finally getting his due as one of the humblest, weirdest dissidents in genre cinema. Long may he f*ck with all of us.

I'm Just Fucking With You