It’s no small feat for one artist to feature their work in both Ballroom D and the Zach Theatre on day two of SXSW. Cue Neil Gaiman, and the release of the mini-series adaptation of his and Terry Pratchett’s beloved novel, Good Omens. (Oh, and did we mention he brought your favorite Doctor, too?) 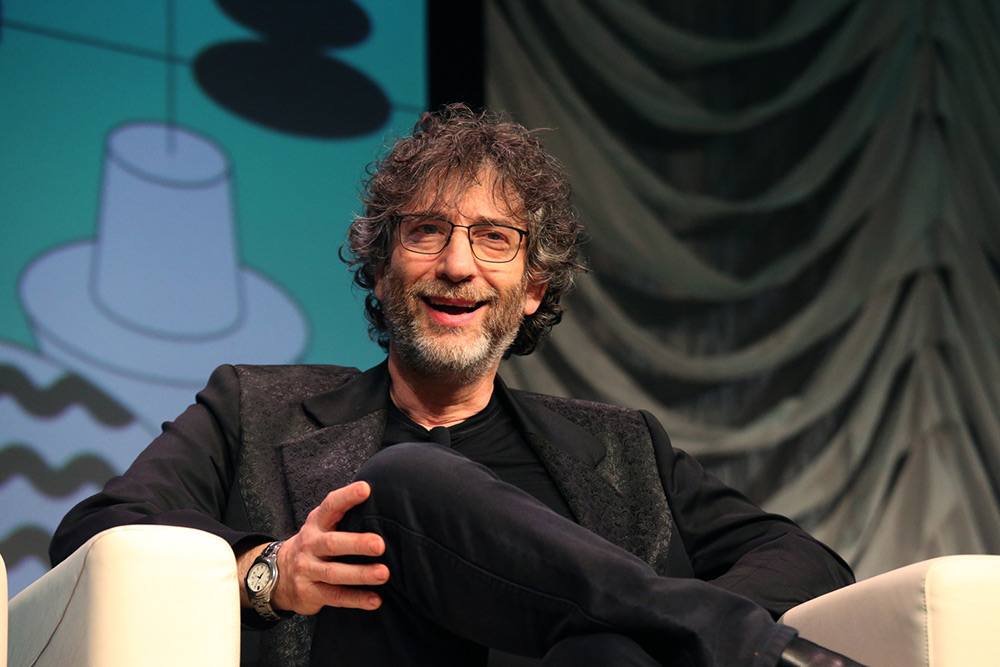 Neil Gaiman in conversation at SXSW (Photo by Gary Miller)

In Good Omens, an angel named Aziraphale (Michael Sheen) teams up with a demon named Crowley (David Tennant) to save the world from the apocalypse. Gaiman and Pratchett co-authored the original novel, with Gaiman now serving as writer/showrunner of the new series and Douglas Mackinnon directing all six episodes.

During Saturday’s Featured Session, Kirsten Vangsness (Criminal Minds) interviewed Gaiman about the release of Good Omens, and Gaiman gave writing advice to budding authors – like this bit on the importance of sticking to a single project: “You will learn more from finishing something than you will from starting or abandoning something.”

And this one, about the tricky nature of writing fiction vs. nonfiction: “Fiction has to be convincing. Reality has no obligation to convince anyone.”

During the “Good Omens: The Nice and Accurate SXSW Event” sneak-peek at the Zach Saturday evening (see red carpet photos here), Aisha Tyler (Archer) interviewed Gaiman and Mackinnon as well as Sheen, Tennant, and Jon Hamm (who plays Gabriel, a character unique to the show). While Sheen attached to the project early (first as a potential Crowley and ultimately as Aziraphale), final casting for the role of Crowley came a bit later. “I decided I wanted David halfway through Episode 3,” Gaiman said. The scene: 1943 during the Blitz. Crowley must rescue Aziraphale in a church. As Gaiman wrote the scene, he imaged Crowley hopping across the church’s consecrated ground like a man on hot sand. It was then he knew: “This is David Tennant.”

Sheen and Tennant also discussed the nature of their characters’ unlikely but close relationship. “I don’t think of just Aziraphale,” said Sheen. “I only think of Aziraphale and Crowley. We felt like a unit.” Tennant agreed, describing the show as “a buddy movie.” That structure is due in a large part to the co-authorship of the show’s source material. When Gaiman originally gave Pratchett the first 5,000 words of what would become the Good Omens novel, Aziraphale and Crowley weren’t separate characters. Pratchett “split that character into two,” Gaiman said. Pratchett made “the cool half and the awkward half” and “the good and the evil.” Gaiman reflected fondly of writing with Pratchett throughout both events, at one point referring to the process as “a fun game of table tennis.” It’s a lovely image: two writers, Gaiman and Pratchett, who together created two inseparable characters, Aziraphale and Crowley.

At the request of his late writing partner, Gaiman kept the adaptation of Good Omens close. “I knew I had to take this on 100%. I couldn’t hand it off to others and hope they would make something that Terry would like.” It’s unusual for one person to direct an entire season, as Mackinnon did here. But with Mackinnon directing and Gaiman serving as writer and showrunner, the two knew they could produce a show that Pratchett would’ve loved. When asked if he would ever want to serve as showrunner again, Gaiman said, “Absolutely not.”

During the Q&A, Gaiman was asked about a potential season 2. “Season 1 of Good Omens is Good Omens,” he said. “There are six episodes, and you’re done.” Judging by the richness of the clips, the delightfulness of the cast, and the long list of Easter eggs in just the clips shown today, one season should prove plenty satisfying.

Good Omens streams worldwide on Amazon Prime Video on May 31.