Comedian and podcaster takes on the afterlife 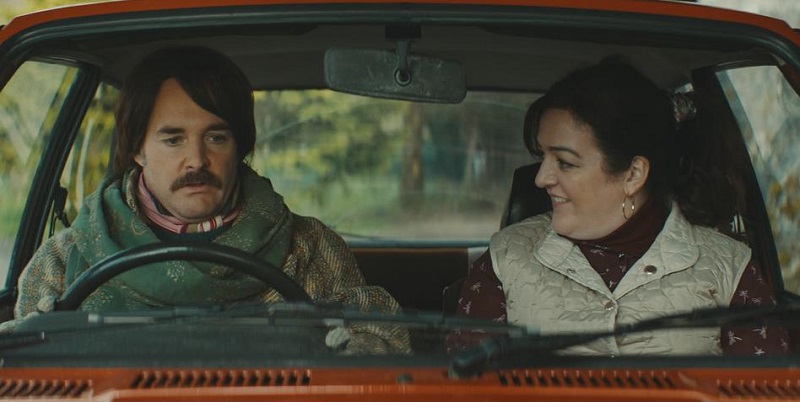 Not all Ghostbusters wear proton packs and defend New York from intergalactic invaders. In the case of Rose (comedian and podcaster Maeve Higgins), they’re a driving instructor in a small Irish town, and the ghosts are, well, a bit rubbish, really.

In Extra Ordinary, hauntings are spirits that stuck around for some reason, but they’re more of an annoying distraction than a curse. There are those that can interact with them – like Rose, who has what is called a Talent but doesn’t use it anymore after a terrible incident involving her dad and a possessed pothole. However, when affable widower Martin Martin (Barry Ward) arrives in her life at the same time as occult rocker Christian Winter (Will Forte), poor Rose is forced to put her microwave lasagna-for-one back in the freezer and face the unseen world again.

It’s a change of pace for Higgins: With a successful TV and radio career in Ireland under her belt, she moved to (ironically enough) NYC, where she works as a stand-up comic, author, and host of a podcast on personal experiences of immigration, Maeve in America. Not only is Extra Ordinary her first starring film role, but it’s also her first experience acting off “a mark on the ground,” she said. However, she had complete faith in “the lads” (directors Mike Ahern and Enda Loughman), who developed the script with and for her. “There was loads of it when we were filming that I couldn’t see because it was special effects, but I was not a bit worried, because they’re really good at that stuff.”

Higgins is still a little surprised that it ever got made, “because it’s a woman in the lead, and it’s really silly, and I don’t think there’s that many really silly, funny comedies any more.”

Silly is important to Higgins. While she tackles politics in her podcasts, she said, “So much comedy in America is so heavy and trying to make things mean something. Whereas this was just going, ‘How do we make this as funny as possible?’”

Moreover, she sees silly as political in its own way. “It’s a noble cause, to give people a break and to make them laugh,” she said, and it’s taken years and a lot of traveling to come to that conclusion. “I led a comedy workshop in Iraq a few years ago, where ISIS was half an hour down the road, holding Mosul, and all this stuff has taught me that being funny is really important.”

Austin Chronicle: How did you meet Mike and Enda?

Maeve Higgins: They made the opening credits for my TV show in Ireland, ages ago. We were just friendly, because they were doing commercials – that’s what they usually do – so our work doesn’t cross over. Then Mike and Enda had a script idea for me, but then I moved to New York and Mike moved to London, so we were living all over the place. But every now and then, when I was back in Ireland, we’d meet for breakfast, and we’d talk about it more, and they’d get a tiny bit of funding to rewrite the script, and they got some funding from the Irish Film Board to make a teaser, and we made that.

AC: So what was their elevator pitch?

MH: There was no elevator pitch. It was Mike mumbling – both of them mumble, so you can’t understand what they say – it was Mike mumbling, “Well, you know, it would be so funny if you were a driving instructor.” He had this scene in his mind where I was wearing tights and taking a look around the fridge and looking lonely. He had some ideas, but there was no slick, “Look, this is what’s going to happen.”

AC: And Irish cinema at the moment has become synonymous with horror, so it makes perfect sense to make a horror-comedy.

MH: It’s funny, the Irish being drawn to dark stories. The lads, Mike and Enda, have a really good read on that. They were in a band before, and they had a really funny song about how the baby dies at the end, because that always happens in Irish things. The baby always dies in plays and songs, and there’s always something awful happening to Irish people.