Collecting the papers, books, and memorabilia from a president’s time in the White House started in the 1930s, when Franklin D. Roosevelt announced the construction of his library. He believed that a president’s documents were part of our country’s shared heritage and, therefore, should be compiled and preserved for future generations. 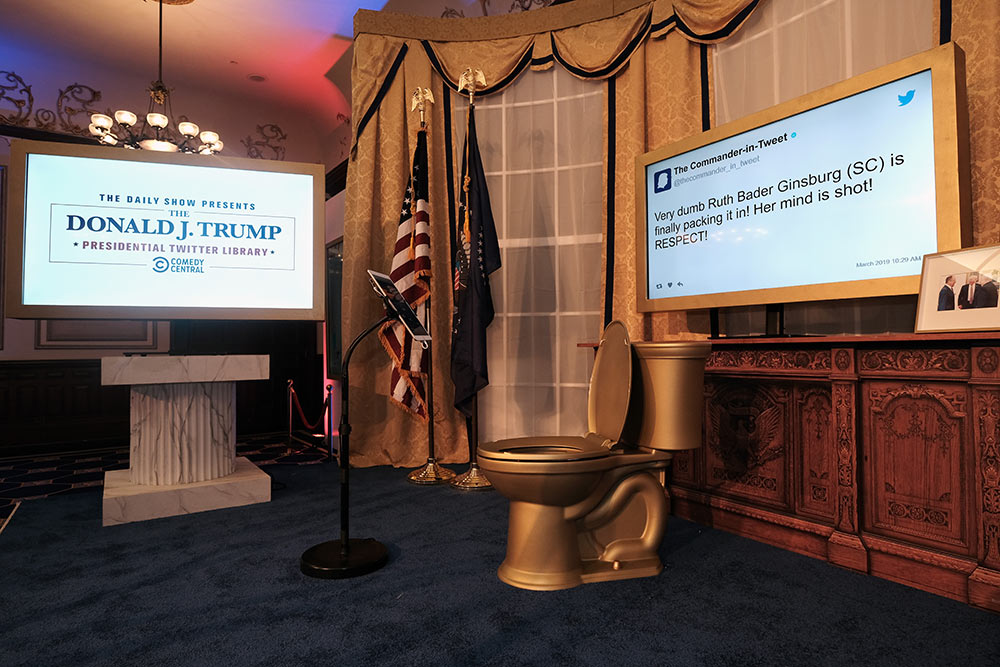 When The Daily Show with Trevor Noah Presents: The Donald J. Trump Presidential Twitter Library opened this Saturday on the mezzanine of the Driskill Hotel as part of SXSW Comedy, it was a painful and hilarious reminder of how far we’ve fallen.

The entrance to our 45th president’s Twitter library comes with a recorded and much-needed warning from The Daily Show host Trevor Noah that the content “is not suitable for small children or people with heart conditions.” You don’t even have to read any tweets to know he’s right. In the main room hangs a mock oil painting of Trump – the kind with those eyes that seem to follow as you walk around the room. It’ll give you a tiny taste of how that poor flag Trump hugged must have felt. Gross! In the center of the room sits the main attraction: Trump’s golden throne and an iPad ready to help you construct your very own tweets comprised of his greatest hits. You know, the real crowd pleasers: #CrookedHillary, “Iran lies,” “Many people say,” “Build the wall,” #ThanksObama, etc. You can even don Trump bathrobes, toupées, and MAGA hats as you fight back against a nasty world calling you a baby and maligning your bigly good name. So Unfair!!

Each room features Trump’s tweets expertly and hilariously curated. One room focuses on “Trump’s Greatest Battles,” such as his Twitter fights against liberal conspiracies and puppets, like toxic masculinity, diet Coke, global warming, and “those people.” It even features a wall of audio recordings from people he blocked. Dubbed the wall of “Verified Survivors,” the list includes the likes of Kathy Griffin, Stephen King, Vicente Fox, and Seth Meyers. Hear in their words what’s like to live in a Trump-free America, and then promptly know the meaning of true jealousy. A display dedicated to lost tweets provides a space to mourn those tweets that were “deleted but not forgotten.” Shout out to: “We,” from May 12, 2017 at 8:48pm, deleted after 10 seconds. (Yeah, that’s right. The tweet read “We.” Just “We.”) And super Texas shout out to: “Lying Ted Cruz and leightweight chocker Marco Rubio teamed up last night in a last ditch effort to stop our great movement. They failed!” from February 26, 2016, deleted after one hour. R.I.P. indeed.

The Russian investigation, the birther movement, the number of white supremacists Trump has retweeted, and the most consecutive exclamation points used – five and 15, respectively, as of the writing of this BTW. They’re all covered. And who knows, maybe you’ll be at the Trump Presidential Twitter Library when he drops the next profound attack on our republic on a platform better-suited for the celebration of #Caturdays.