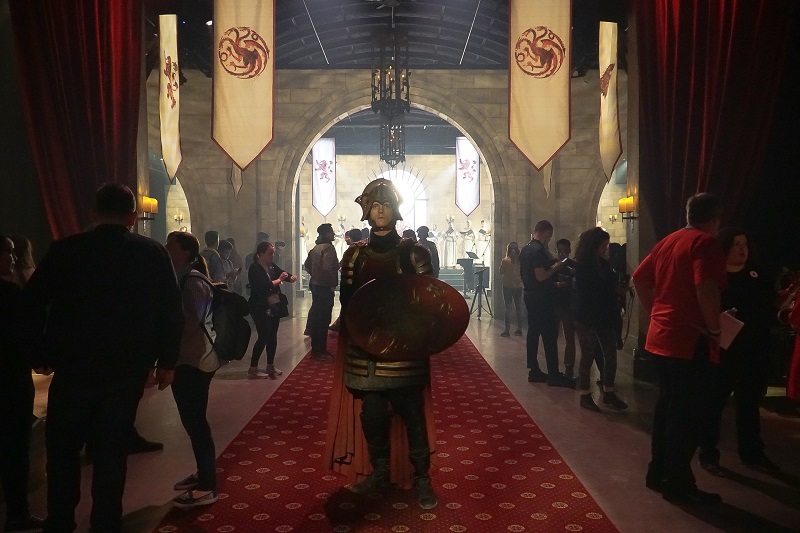 HBO always revels in making a splash at SXSW, and this year they’ve gone all-out to promote the final bloody season of Game of Thrones. Partnering with the American Red Cross, the Bleed for the Throne event jump-starts the largest promotional blood donation in the United States – and unequivocally the nerdiest.

As you sit and wait for your turn on the iron (or, blood) throne to sacrifice (uh, donate) the precious fluid from your body, the boisterous opening credits score fill the room, which is both soothing for the fan who has missed the music in their living rooms for over a year as much as it is foreboding for the offering that is about to be given. Unlike SXSW 2018’s Westworld event, the Bleed for the Throne experience is as smooth as they come. There are no long waits to escape the event via charter bus like last year, yet it feels every bit as immersive and captivating. After donating to the American Red Cross, fans are ushered to kneel before the Red Woman – who is the spitting image of Melisandre – and she presents the donor with a “Hand of the Throne” pin in front of the ancient throne Queen Cersei is currently “ruling” from (sadly, this year you cannot sit in it and scream, “Burn them all!”). 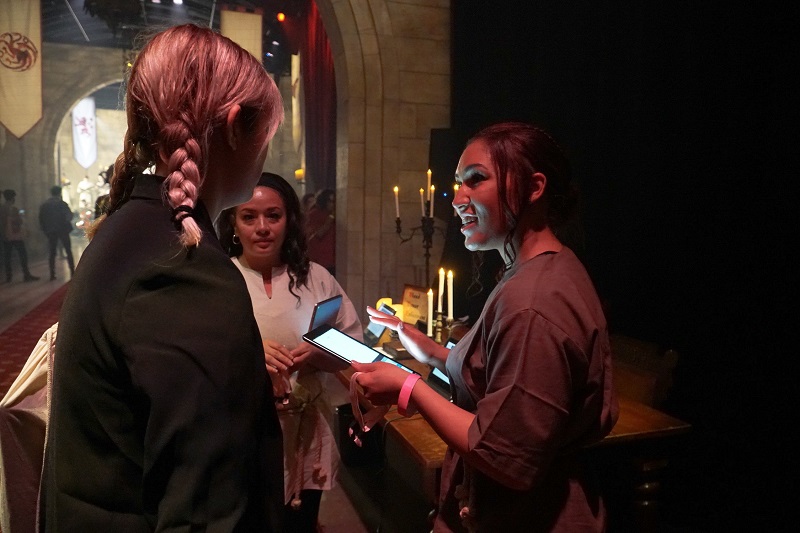 While it’s dazzling to giddily gaze upon and interact with skilled actors doing their best Dothraki impersonation (“Which one of you ladies wants to carry my stallion?”), the most immersive part of the experience is a walk-through that forces you to trudge in the footsteps of four leading favorites who have done their fair share of bleeding: Arya Stark, Cersei Lannister, Jon Snow, and Tyrion Lannister. With headphones on and an iPod Touch in hand, your group navigates through a series of rooms that combine audio and visuals that make you feel like you’re undergoing the same suffering each character has endured.

Real props and costumes from the series are scattered throughout this walkthrough, from swords used by the Lannister army to The Mountain’s enormous armor. Cersei’s “Walk of Shame” is the most memorable – the audio directs you down a dark hallway where floating heads scream at you as Septa Unella’s large head spits, “Shame!” at the corridor’s end. It’s claustrophobic and haunting stumbling through the Lion Queen’s ugliest moment. One glaring omission from the antiheroes who have spilled their blood is Daenerys Targaryen. Certainly, the Mother of Dragons has suffered enough for her claim to the sharpest chair in Westeros, so perhaps this activation is more of a shrine to the four who have sacrificed and failed to seize the Iron Throne? We’ll only know when the final season premieres April 14.

On the way out of the activation, there’s a War Camp outside filled with tents and fire pits packed with over 80 actors and musicians to make your final moments count. You can eat a Shake Shack burger (a Westeros delicacy) while eagerly listening to a Wildling share their war stories, prep weapons with a blacksmith, and allow a woods witch to read your fortune. All appointment to donate blood are currently filled, but there is a standby line available for fans who were unable to make an appointment online. According to the team members, each donation saves three lives, so if you’re healthy and able it’s a rewarding experience – and hey, it’s kind of rad to feel as noble as Arya for a brief 10 minutes.

See full gallery of the Bleed for the Throne blood drive and immersive experience.

Bleed for the Throne

SXSW 2019, Bleed for the Throne, Game of Thrones