SXSW Panel Recap: From CBGB to the World – A Downtown Diaspora

“Mushrooms grow in the dark”

Before punk became a codified sound and style – an aggressive, post-Ramones genre of high-speed chainsaw guitar, minimal chord structures, and black leather jackets – it acted as an umbrella for DIY art and music under difficult (and usually hostile) circumstances. dBs linchpin Chris Stamey ascribed its birth to a NYC “petri dish” named CBGB. 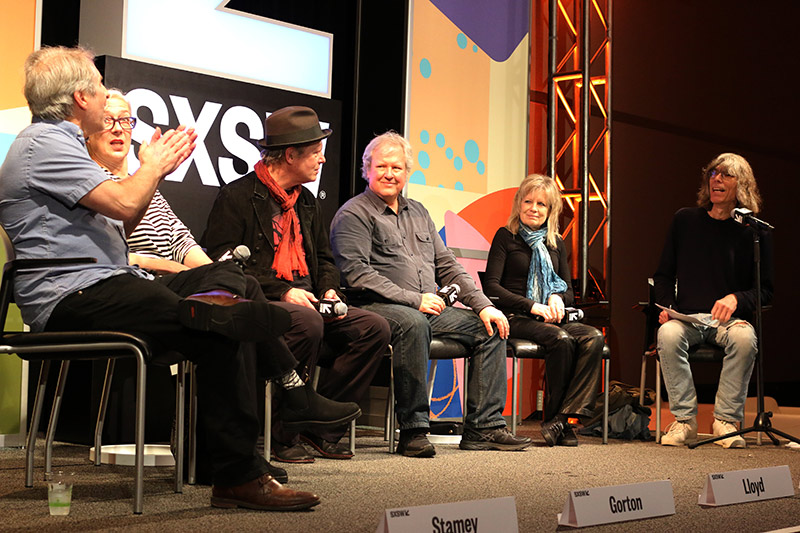 “We were all poor,” recalled Talking Heads bassist Tina Weymouth of the mid-Seventies. “None of us had money, New York City had no money, but we also didn't have [Nineties mayor Rudolph] Giuliani ticketing us for jaywalking.”

“[CBGB owner] Hilly [Kristal] enabled us,” Television guitarist Richard Lloyd interjected. “He was a frustrated performer himself. He had a single on the jukebox, like our own version of Waffle House!”

The Friday panel, moderated by veteran Rolling Stone writer David Fricke and also featuring Talking Heads drummer (and Weymouth spouse) Chris Frantz and New York Rocker magazine photographer Julia Gorton, described the club as a salon for impoverished writers/artists/filmmakers. As such, the group traced how a world-changing scene evolved from almost no resources.

“I ate one meal per day to save up for my bass amp,” Weymouth emphasized of the sacrifices punk required, adding that all the Talking Heads lived in a tenement. “With no toilet, no heat, nor hot water, but we could rehearse there. There was no health insurance, so you'd better not get sick.”

“Make good friends with Lady Poverty,” recounted Lloyd, passing on lessons learned to new bands. “Find a dive bar, convince them to let you play live music, make your own scene. You have to be that dedicated to create something. Maybe people will notice, maybe not.

“But mushrooms grow in the dark.”

From CBGB to the World: A Downtown Diaspora