Stubb’s was just over half full when Keith Urban emerged at 11pm on Friday night, and considerably under that by the end of his 80-minute, 16-song set. Though the country superstar and SXSW keynote speaker gave a genuinely enthusiastic performance, mainstream country has never found its footing at the festival, and with good reason. It’s not very good. 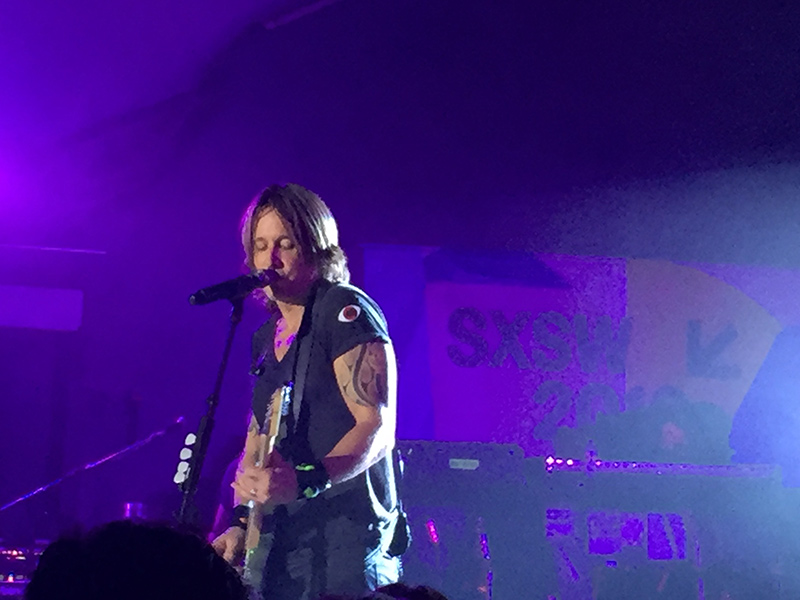 “It’ll be loose tonight,” the Kiwi declared at the outset, flashing his high-watt smile as he locked in with “Gone Tomorrow (Here Today).” Although promoting upcoming LP Graffiti U, Urban stuck to his playbook of hits. Unfortunately, that catalog is an innocuous, watered-down mix of rock, pop, and country that does a disservice to all three genres.

Through “Good Thing” and “Long Hot Summer” to “Little Bit of Everything” and “Raise 'Em Up,” the singer marked a checklist of contemporary country tropes, which he’s helped define over the past 20 years. Even his sincere attempt at an empowerment anthem, “Female,” strikes as miscalculated. Far better in confronting the industry’s sexism was “Where the Blacktop Ends,” with Larkin Poe contributing guest shred.

Bursts of Urban’s stellar guitar alleviated the diluted songwriting, while his charisma held sway at the front. He even continued his tradition of running to the back of the venue and gifting his guitar to a fan during “You Look Good in My Shirt.” Noting he last played Stubb’s in 2004, Urban’s continuous shout-outs to Austin surpassed pandering after 10 minutes, even as new cut “Texas Time” hit a hometown high.

Setting up Steve Miller’s “The Joker,” he laughed, “It was either this or a Willie song.”

Thank God it wasn’t the latter.

Keith Urban is the kind of guy you want to root for in the morass of modern pop country, but his set ultimately lived up to its closer: “Wasted Time.”