The youngest, angriest, motorik-punk band on the planet

The most brutal band of the conference arrives from the historical maritime headquarters of Bristol, England, and could be the grandsons of that city’s reigning contribution to post-punk, the Pop Group. 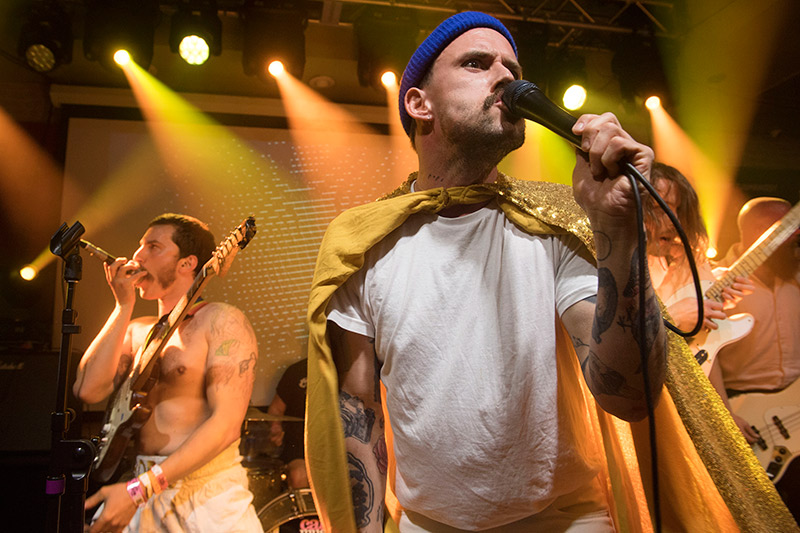 Thursday night at Latitude 30’s British Music Embassy, BBC deejay Steve Lamacq introduced Idles by declaring last year’s debut long-player Brutalism his favorite album of 2017. After that bit of wind-up, the quintet’s absurdist visuals came as a surprise. One of the two guitarists dressed like a boxer, with his well-worn Stratocaster strapped all the way to his chin like a refugee from Gerry & the Pacemakers.

Yet the barrage Idles unleashed proved infectious and ungodly, the most tuneful, danceable riot one could hope for. Drummer Jon Beavis beat 10 shades of brown out of his kit, relentlessly pounding out the same ferocious, primal, tom-tom-heavy beat all night. To that, add in two anti-guitarists happily dancing across prodigious pedalboards and avoiding every rock cliche in the book. In fact, the pair spent almost as much time in the audience as onstage.

For his part, Talbot led the captivated, pogo-crazed crowd in bark-along polemics like, “The best way to scare a Tory is to read and get rich!” (“Mother”).

The effect was that of the youngest, angriest, motorik-punk band on the planet. By the time it all crashed to an close with axe-grinders Mark Bowen and Lee Kiernan dancing atop the bar in loosely synchronized tandem like drunken show-band musicians – their Fenders issuing an effects-warped racket – all was right in the world.