Architectural decay becomes a street-artist canvas you can navigate

This is director Lester Francois’ documentary of the Australian street artist RONE, a man who for years has been turning walls inside abandoned buildings in Melbourne into immense, monochrome portraits of women. 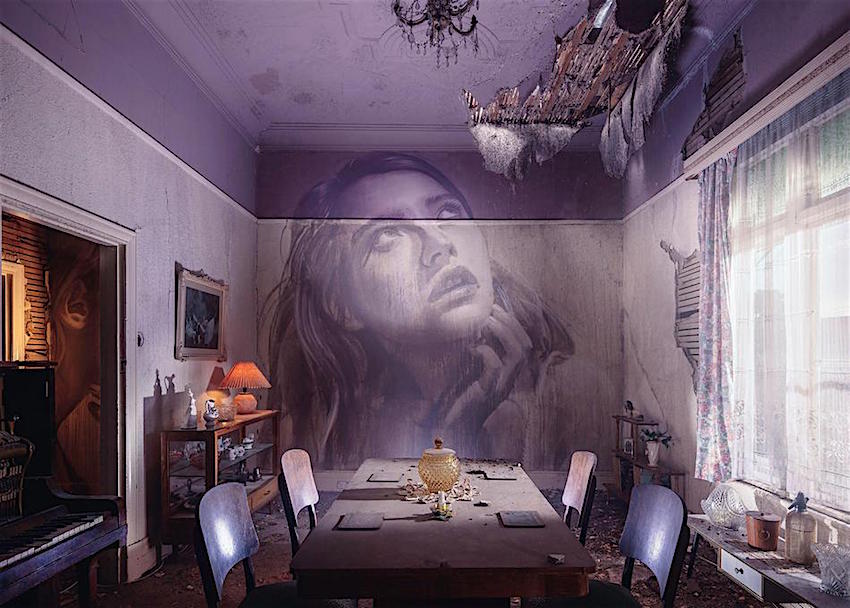 RONE’s done similar exterior work on thriving architecture, too, and those images are lovely and unexpected wherever they occur, suddenly offering a painterly face a few stories tall amid the bustling urbanscape. But it’s when the artist enters the remains of development gone kaput that shit gets really interesting – especially in the context of virtual reality.

The buildings RONE invades (even if he must crawl through a window for a little artistic B&E) are most often industrial, sometimes residential, and all falling to ruin – and so the artworks rendered within them continue, abandoned as they are, to also crumble and decay. And that’s one level of how this VR documentation becomes wholly apropos as a method of recording here: The medium that’s coming to us from what seems like the future is capturing what’s literally disintegrating into the past.

Another level is the three-dimensional aspect. This might appear obvious – duh, it’s VR – but follow me here. Francois’ curated experience of RONE puts a viewer onto a winding pathway, an urban street bordered by buildings and walls that display the artist’s works as they originally appeared – whether covering the sides of those buildings, or as large canvases on a gallery’s verticals. And that easily navigable stroll serves us as well as any decent IRL exhibition might, with resolution that's impressively close to meatspace vision. And there are side-trails along the journey, too, from which you can view, say, a 360-degree video panorama of RONE working in his studio or at several of the abandoned sites. And, again, this is a terrific experience for an artlover.

But – here’s the thing – Francois and his team have also re-created an entire abandoned house that you can navigate through, moving (as one might move in Google streetview) through the cluttered, junk-laden rooms and marveling at that in and of itself (like you’re some old-school urban explorer, like you’re the dear departed Ninjalicious) until your eyes are suddenly caught by a wall glorified with RONE’s portraiture.

You’re no longer only in a virtual gallery with all of the requisite convenience-of-viewing: You’re also in a virtual re-creation of the infrastructure that part of this specific gallery’s raison d’etre first appeared in. You’re haunting the beauty gifted to a dwelling that’s doomed, in the real world, to fall with increasing fragmentation into an ever-deepening yesterday.