At 9:45pm Tuesday, on the corner of Red River and Seventh, Meute introduced itself to Austin and SXSW.

The dozen-piece marching band from Hamburg wore regal red jackets with flair like smiley face rave buttons. A huge crowd formed, listeners even dancing their way into the center of the band. Despite a lack of synthesizers, they were clearly playing Germany’s greatest musical export – techno – and specifically, a cover of Ame’s 2005 classic “Rej.”

Sounds like an unlikely combination, but it works. A xylophone carries the synth leads, tuba supplies a pulsing bass, and a massive bass drum simulates an 808. The horn players cleverly use hand mutes to emulate the sound of a high pass filter, and there’s moments where the entire band slurs into a break, as if a DJ had added an echo effect. 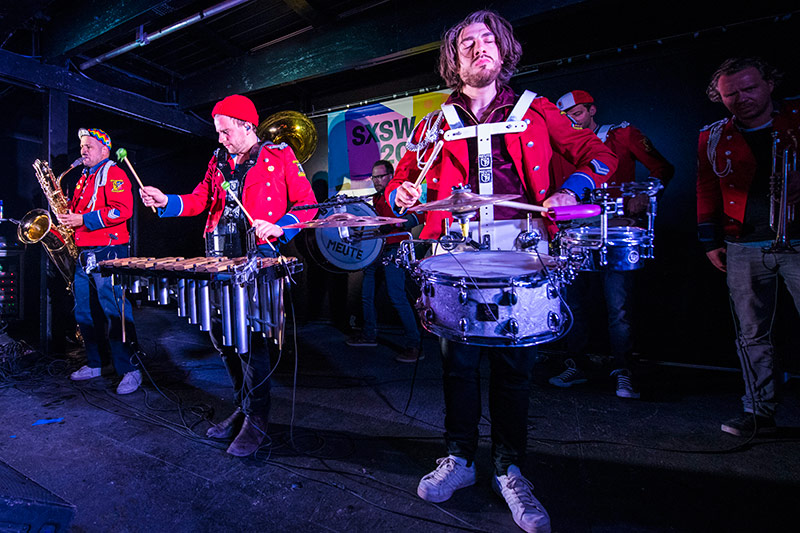 The impromptu street performance proceeded their official 12:20am showcase at the Main II. Inside, engineers mic’d them admirably, showing that in addition to energy, these guys had tone. During their version of Laurent Garnier’s “The Man With the Red Face,” they knelt down to the floor and a packed house followed suit, crouching while a trumpet melody mimicking house synth stabs built into a massive drop.

Then Meute unleashed a pair of confetti canons and the crowd erupted.

The most interesting element of the performance was that people instinctively reacted to it like electronic dance music. People moved as if they were in a nightclub, rather than a New Orleans second line parade. Even without any technology, everyone could tell it was techno.