Bad Gyal, born Alba Farelo, espouses simple pleasures – getting drunk, being rich, and having sex – chronicling them all through Auto-Tune over a futuristic, dancehall backdrop. 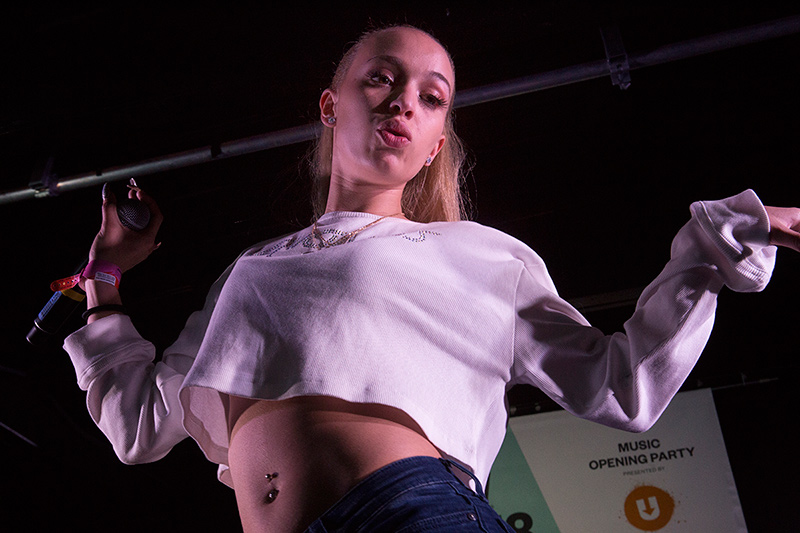 “’Sup,” she greeted the Main on Tuesday night, stunting with low-rise jeans, a white, midriff-baring sweater, fur coat, and her hair pulled up into a sleek pony like Ariana Grande.

The Catalonian singer quickly transitioned into last year’s single “Jacaranda,” wherein she traded off vocals with the recording to electro-tropical beats provided by DJ Florentino. Farelo fuses reggaeton, dancehall, and rap into a cybernetic earworm that recalls MySpace trends like Lady Gaga’s “Just Dance” and Owl City's "Fireflies,” but with the attitude of Rihanna or Cardi B.

“Me gusta el perreo,” asserts the 20-year-old on her most recent single “Blink,” mimicking the act of backing into someone booty first by getting low and mocking the cocking of a gun as the beat drops. She then transitioned into “Mercadona” off 2016’s Slow Wine mixtape. Moving the mic stand to the middle, Farelo used it as a pole, gracing herself up and down on it to the trip-hop rhythms.

Grabbing the mic again, she began to twerk as “Internationally,” off her debut Worldwide Angel, cranked a love ode to her lux-filled life of alcohol, money, and work. She grabbed her drink for “Tu Moto,” utilizing it as a prop while moving her hips, hands swaying and her tongue out. The singer closed with “Fiebre,” a turbulent rap about a love affair between her and someone she’s embarrassed to be with, cushioned by a fast and sensual pop-reggaeton rhythm that parallels her staunch femininity and fragility.

Initially greeted by confusion from a crowd clearly there to see Pussy Riot, onlookers questioned what language she was speaking. Another wondered if this was Iggy Azalea’s resurgence. Eventually, Farelo convinced everyone what her songs preach. She’s hot.

Consider it a different type of feminist anthem.